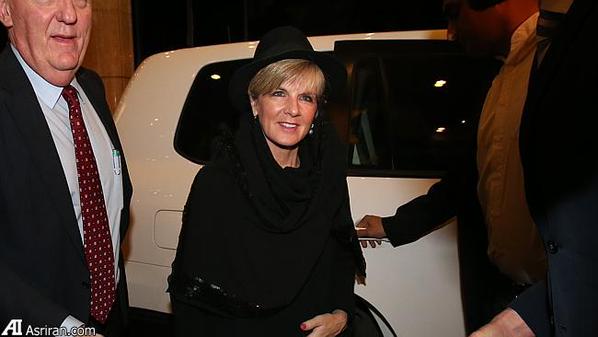 Kuala Lumpur, April 19, IRNA – Australian daily Herald Tribune reported in its Sunday edition that Australia has agreed to share its secret information with Iran in campaign against the ISIS terrorists.

The Australian daily reported the news following a visit to Tehran of Foreign Minister Julie Bishop.

During his stay in Iran, she met and conferred with her Iranian counterpart Mohammad Javad Zarif and President Hassan Rouhani.

The Herald Tribune columnist has expressed deep surprise that the once labeled as part of axis of evil is considered an insider in the international campaign against terrorism.

The term was coined by one of the most notorious US presidents, George W. Bush, who launched two deadly wars in the Middle East — Iraq and Afghanistan, referring to Iran, North Korea and the former Libyan regime, aimed at imposing greater political pressure against them.

Sydney Morning Herald has deducted that sharing classified information with Iran by Australia is most probably a sign of high optimism about the nuclear agreement between Iran, the US and five other world powers.

Foreign Minister Bishop has on effects of her Iran visit on Australian relations with Israel said that Iran has the largest population of the Jews in the Middle East outside Israel that is 20,000 strong.

She said that she was pleased with Iran has agreed to dispatch a delegation to discuss the return home of the Iranian asylum seekers from Australia.

Foreign Minister Bishop has also labeled as out-of-context the criticism of some individuals and groups about her comments on wearing a scarf quite voluntarily and being very pleased with.

‘This was the first visit of an Australian foreign minister after 12 years and I do not want it to be the last one. Therefore, if someone will ask me to wear a scarf again to meet the Iranian president one more time I will not hesitate to do so,’ she said.