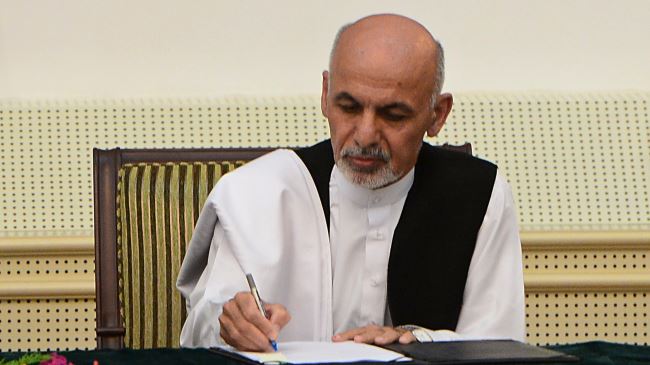 Afghan President: Daesh to be eradicated by collective resolve

Tehran, April 19, IRNA — Afghan President Mohammad Ashraf Ghani said on Sunday that all countries of the region should help restore peace and stability as eradication of Daesh terrorist group requires collective resolve of all countries.

Speaking to reports in a joint press conference with President Hassan Rouhani, he said expansion of bilateral, trilateral and regional cooperation is of prime importance as the regional nations are faced with the real danger of terrorism in various forms.

Both Iran and Afghan nations are determined to open a new chapter in relations, he said adding that during my current visit we have discussed avenues to prepare the ground for gradual return of Afghan refugees and fight with terrorism and drug trafficking.

Expressing appreciation over hospitality made by Iranian government and nation, he expressed the hope that the Iranian president would give positive response to the invitation extended to him to pay a visit to Afghanistan.

Afghan president leading high ranking delegation arrived in Iran and conferred with his Iranian counterpart on issues of mutual interests along with regional developments.