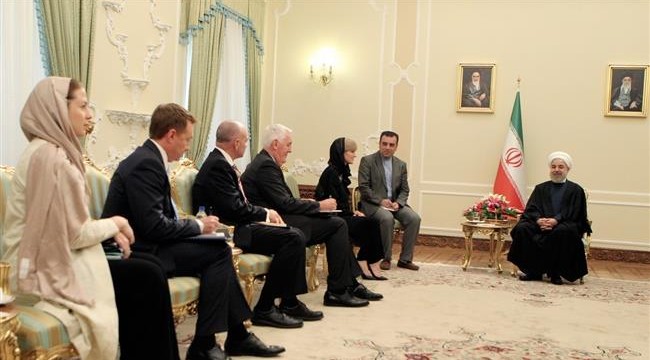 Iran ready to work with Australia against terrorism: Rouhani

Iranian President Hassan Rouhani has expressed the Islamic Republic’s readiness to cooperate with Australia in the fight against terrorism.

“Iran is ready to cooperate with all countries, including Australia, in the fight against violence, extremism and terrorism,” Rouhani said in a meeting with Australian Foreign Minister Julie Bishop in Tehran on Saturday.

Describing terrorism as a major threat, Rouhani urged all countries to adopt a unified and timely approach toward the scourge of terrorism and acts of oppression against defenseless people regardless of ethnic, religious or racial issues.

Touching on the war in Yemen, Rouhani said the crisis in the Arab country could only be settled through a political solution not through the bombardment of civilians.

Iran is ready to cooperate with other countries to help end the bloodshed in Yemen, the Iranian president added.

Saudi Arabia’s air campaign against Yemen started on March 26, without a United Nations mandate, in a bid to restore power to the country’s fugitive former president, Abd Rabbuh Mansur Hadi, a close ally of Riyadh.

According to reports, over 2,600 people, including women and children, have so far lost their lives in the attacks.

Regarding negotiations over Iran’s nuclear program, Rouhani said a nuclear agreement between Tehran and the P5+1 group would benefit the Islamic Republic, the six world powers as well as the region and the entire world.

ISIL started its campaign of terror in Iraq in early June 2014. The heavily-armed militants took control of Mosul before sweeping through parts of the country’s Sunni Arab heartland. Iraqi soldiers, backed by volunteer forces, have been engaged in joint operations to drive the terrorists out of areas they have seized.