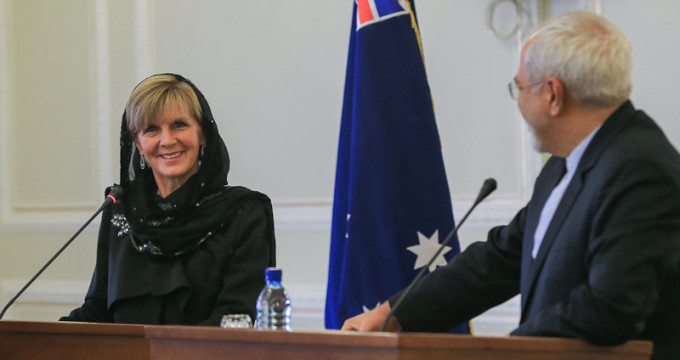 Australian FM: Problem of sanctions must be settled

Tehran, April 18, IRNA – Visiting Foreign Minister of Australia Julie Bishop said on Saturday that she is happy with the progress made during the nuclear talks between Iran and the Group 5+1, stressing that the issue of sanctions removal should be settled as well.

Speaking in a joint press conference here with Foreign Minister Mohammad Javad Zarif, she said this is the first time that an Australian FM visits Iran after 12 years. Bishop thanked her Iranian counterpart for inviting her to visit Iran.

Referring to her meeting with Zarif as positive, Bishop said she is to hold talks with President Hassan Rouhani later in the day.

She hoped for Tehran-Canberra better interaction and cooperation in the future.

She said that the two foreign ministers exchanged views on major bilateral, regional and international issues particularly the issue of the terrorist group of Daesh (ISIS).

Referring to Daesh as a very complicated and dangerous form of international terrorism, Bishop said Australia has been supporting the government of Prime Minister Haider Al-Ebadi of Iraq by training the Iraqi military forces and attending the international coalition airstrikes against the Daesh terrorist group.

She expressed hope that hardships of the Iraqi people would soon come to an end.
The Australian minister also said she had positive discussions with her Iranian counterpart on bilateral relations including visa issuance for the Iranian nationals and return of the smuggled Iranians from Australia.

Bishop added she invited Foreign Ministers Zarif to pay a visit to Australia in order to follow up the issues discussed in Tehran.