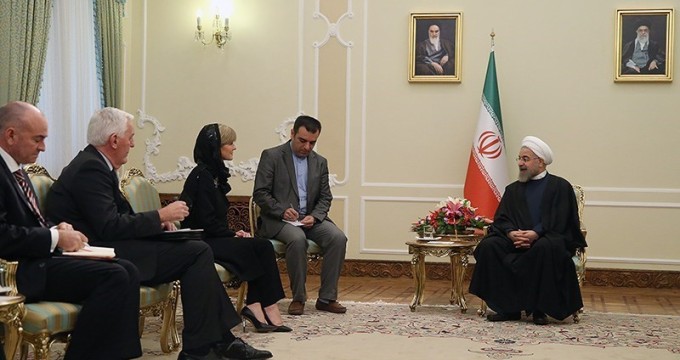 Australia’s foreign minister on Saturday hailed Iran’s efforts to crush the jihadist Islamic State group in Iraq, saying on a rare trip to Tehran that the militants can be defeated.

Julie Bishop is Australia’s highest-ranking official to visit Iran in 12 years and she discussed the conflict in Iraq with her Iranian counterpart Mohammad Javad Zarif.
Australia is part of an international coalition in Iraq and has 500 troops deployed there.

Iran, though not part of the coalition, has run a parallel campaign using Shiite militias and military advisers to reverse the IS surge that came close to felling the Baghdad government last June.
“We are witnessing a more complex and dangerous form of terrorism with Daesh,” Bishop said at a joint press conference, using an Arabic acronym to refer to the militant group.
“Both countries can contribute in the fight against this terrorist organisation and put an end to the misery of the people in Iraq,” she said, referring to Iran and Australia’s efforts.
Iraq needs “a strong and stable government” added Bishop, who along with Zarif said Australia and Iran were in Iraq at the request of the Baghdad government in fighting IS.
“The fight against Daesh and terrorism in Iraq should be managed by the Iraqi government,” Zarif said. “Anything we do in Iraq is in coordination with the Iraqi government.”
Bishop will later meet President Hassan Rouhani and Ali Akbar Velayati, foreign affairs adviser to supreme leader Ayatollah Ali Khamenei.
Her trip comes after Iran and world powers reached a political framework on April 2 for a deal to end the standoff over Tehran’s nuclear programme. A comprehensive agreement is due by June 30.
But in Australia public concern towards Iran has focused on asylum seekers. Iranians make up 23 percent of 1,848 people held in immigration detention centres in Australia, according to official figures from late March.
Australian Prime Minister Tony Abbott also raised the subject last week, noting: “We will be talking to the Iranian government about taking back people who are… Iranian citizens, because they deserve to be in Iran. They belong in Iran.”
However after their meeting, Bishop and Zarif gave no details of proposed changes in policy.
“We discussed the challenge we have been facing these recent years of people in the smuggling trade. We agreed to continue these discussions at consular level,” Bishop said.
Zarif added: “It is an important and sensitive human rights issue and we hope that (the visit) paves the way for improving the situation of the asylum seekers.”