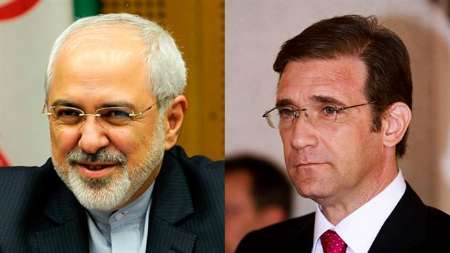 The Iranian foreign minister who is on an official state visit to Portugal, met with Portuguese Prime Minister Pedro Passos Coelho in Lisbon and updated him on the latest situation of Iran’s nuclear case.

Coello said a final deal between Iran and the global powers on Tehran’s nuclear program will not only benefit the negotiating sides, but also all the countries of the world.

“Reaching a comprehensive agreement is beneficial to both Iran and the European negotiating sides as well as to other countries of the world,” said Passos Coelho.

Zarif called for promotion of bilateral relations with Portugal.

The Iranian foreign minister also touched upon the conflicts in Yemen, Syria and Iraq and said that the ongoing battle against terrorism needs the contribution of all countries and should be conducted in a “thorough, calculated and indiscriminate” manner.

The Portuguese prime minister further expressed hope that Iran and the P5+1 could agree on the final accord, describing the task, however, as having “numerous difficulties,” requiring the two sides to take “confidence-building steps” in the remaining time.

Coelho also called for more cooperation between Iran and the European Union in confronting terrorism, which he said could help increase stability and security across the Middle East and Europe, adding that Tehran and Lisbon should also try to expand their multilateral ties in all areas of interest.

Iran and P5+1 group of countries – Russia, China, France, Britain, the US and Germany – reached a mutual understanding on Tehran’s nuclear program on April 2 in Switzerland. The two sides are expected to start drafting a final deal which they seek to sign by the end of June.