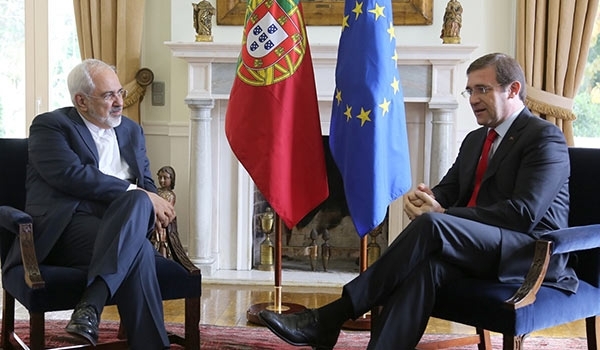 TEHRAN (FNA)- Portuguese Prime Minister Pedro Passos Coelho in a meeting with Iranian Foreign Minister Mohammad Javad Zarif in Lisbon expressed the hope that Iran and the Group 5+1 (the US, Russia, China, France and Britain plus Germany) will strike a final deal in the coming months.

“I hope that Iran and the global powers will soon sign the final deal,” Coelho said.

He noted that a final deal between Iran and the global powers will not only benefit the negotiating sides, but also the entire world.

Coelho also called for further cooperation between Iran and the European Union in confronting terrorism, and said, “Such cooperation could help increase stability and security across the Middle East and Europe.

The Iranian foreign minister, for his part, briefed the Portuguese PM on the latest developments in Iran-G5+1 Talks.

Zarif pointed to the ongoing crises in Yemen, Syria and Iraq and said, “The ongoing battle against terrorism needs the contribution of all countries and should be conducted in a thorough, calculated and indiscriminate manner.”

On Wednesday, the Iranian parliament’s Nuclear Committee released a factsheet to declare the revisions needed to be made in the Lausanne statement that was issued by Tehran and the world powers as a framework understanding at the end of their nuclear talks in Switzerland earlier this month.

The factsheet which was presented by Head of the Nuclear Committee Ebrahim Karkhaneyee stresses the necessity for respecting the redlines and guidelines specified by Supreme Leader of the Islamic Revolution Ayatollah Syed Ali Khamenei, making Iran’s decisions and undertakings reversible to enable the country to resume its nuclear operations in case of the other side’s non-commitment to its undertakings, and immediate termination of all sanctions in a single step and on the first day of the implementation of the final agreement.

The factsheet also necessitates commitment of both sides to their undertakings based on the Geneva agreement, a fair and reasonable balance between the gives and takes, taking good care not to impair the country’s security and military boundaries and national interests, providing 190,000 SWUs (Separative Work Units) of nuclear fuel enrichment capability needed by Iran to produce fuel for the Bushehr nuclear power plant immediately after the end of contract with Russia, safeguarding the nuclear achievements, actual operation of all nuclear facilities of Iran not in words, but in action, continued Research and Development (R&D) works and scientific and technological progress in Iran and immediate application of R&D findings in the country’s industrial-scale uranium enrichment cycle.