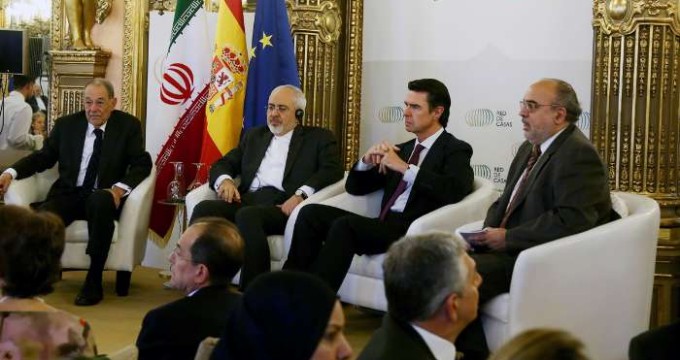 Zarif: Sanctions have never been effective

Speaking in a meeting with Spanish elite, Zarif defended Iran’s inalienable right for peaceful use of nuclear energy and said Iran has always been following the path to possess peaceful nuclear technology and has never shown any diversion, not basically seeing any reason for that as former EU High Representative, Javier Solana acknowledged.

He said that the sanctions violated the humanitarian law blocking the way to import medical supplies to the patients suffering from incurable diseases.

He said that sanctions generally inflicted damages on the ordinary people. He added that patients in need of foreign medicines suffered from the tyrannical sanctions.

He criticized the western governments for considering the sanctions as a privilege.

‘It is unrealistic and inefficient tool. The approach prevents those who are seriously endeavoring to reach agreement.’

He said pressures have always been destructive and can not be helpful in the way to reach comprehensive accord.

He said that Iran and Spain would develop cooperation on tourism, energy and gas.

Noting that Iran has been moving in line with the policy of confidence building and transparency, Zarif said, ‘You can not expect the Iranian nation to trust the West despite their background.’

Chief of Iran foreign diplomacy organ underlined that confidence-building and transparency should be on both sides and honoring the commitments and termination of sanctions should go in parallel.

In the meantime, Zarif said as far as developments west Asia is concerned, Iran has taken constrictive steps since beginning of the formation of the government of President Rouhani and has formed good relations with all the neighbors.

On Daesh terrorism, he said, ‘We refused to support Daesh and al-Qaeda; Which countries did support Saddam? These have always been supported by others, including Europe. We have always been moving on a right course.’

The Iranian minister said to guarantee stability and security in other region, the countries created and supported certain groups, causing further insecurity and instability of the region.

Zarif made clear that the countries imposing sanctions against Iran were trying to dismantle the democratic system of Iran but our nation showed through its historical resistance that it is an inefficient tool, so forcing the countries imposing sanctions to choose other way, let’s say the diplomatic choice for engagement with Iran. ‘We have always been emphasizing the principle and moving in that line.’

‘As for Yemen, history has proved that no foreign country can dominate Yemen. bombardment of Yemen, of people’s houses, of the country’s infrastructures and of its hospitals is not the solution to the crisis. The preconditions can not accelerate access to the solution as was the case in Syria.’

Zarif said, ‘Iran’s proposal is: Immediate truce of the air raids and ground invasion, humanitarian aid shipment to people plus medicine, food, water and medical treatment of the injured; Yemeni-Yemeni dialogue which should be facilitated by other countries; formation of a broad-based government that would have good and constructive ties with all the neighbors.’

Referring to the Zionist regime’s measures, Zarif said, ‘For Netanyahu, access to a solution to nuclear issue, peace and stability in the region, peace and friendly relations are annoying and he wants to launch hue and cry on the peaceful nuclear program to cover up injustice perpetrated against the Palestinians through occupation and enhancement of Jewish settlements, while keeping others busy with other issues.’

‘Now the al-Nasra Front, which is a terrorist group, has the best kind of relations with the Zionist regime. It treats the injured at its hospitals. Is there anybody taking the issues into consideration?’

He went on to say that in Libya, Syria and Iraq, the Islamic Republic of Iran is an important regional player and various media in the world are also speaking of the issue. ‘We are in Iraq not with military force but with military attaches, going to maintain security in the country to fight Daesh in cooperation with government of Iraq.’

‘We are with people of the region, confronting Daesh and al-Qaeda. Based on the UN report, 1,000 forces monthly go to help Daesh in Syria and Iraq. Which borders do they cross? Have we been the supporters of al-Qaeda? Have we provided Daesh with financial support and military equipment? Have we trained Daesh forces along with their western and regional allies?’ questioned Zarif.

Spanish Minister of Industry, Jose Manuel Soria for his part briefed the audience on Iran-Spain ties and future horizons, saying Iran and Spain have had very good relations, so the trend should continue.

He noted that the Lausanne statement can open up gates for hope and peace and those are common and mutual interests which are in favor of both Iran and the G5+1.

He said 1,000 Spanish enterprises are busy in trade with Iran in various industrial, communications, economic and infrastructure domains.

The Spanish minister said that in 2014, Spanish officials managed to meet a group of Iranian officials, getting happy that Iranian President Hassan Rouhani’s government plans to pay more attention to the tourism industry because it plays an important role in Spanish economy.

He said Iran is an important country for Spain due to its rich civilization and culture as well as unique attractions and that’s in favor of both Iran and Spain.

Solana referred to developments in the Middle East, especially Syria, Iraq and Yemen, and underlined necessity of dialogue between Iran and Saudi Arabia as two important countries in the region.

Solana said Iran has not invaded any country over recent centuries.