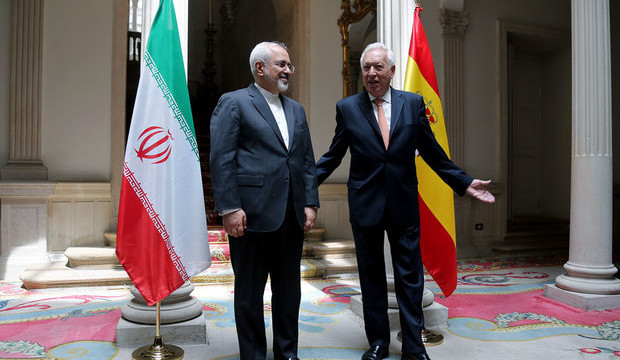 MADRID, Apr. 15 (MNA) – In a meeting with Spanish PM Mariano Rajoy Brey, FM Zarif has expressed Iran’s stance on Yemen developments, ISIL and terrorism, and stressed furthering of ties between Iran and Spain.

He maintained that Iran’s proposed solution to the conflict in Yemen is based on an immediate ceasefire, providing humanitarian assistance to Yemeni people and the creation of an inclusive government participated by all Yemeni factions. Prior to his visit to Spain, Zarif had visited Kazakhstan’s capital, Astana, where he declared Iran’s readiness to help facilitate a political transition in Yemen.

Zarif also stressed the need for furthering Tehran-Madrid cooperation in all areas of mutual interest.

Mariano Rajoy Brey, for his part, deemed Tehran-Madrid bilateral relations ‘excellent,’ adding Spain’s trade minister accompanied by a delegation from the private sector is due to visit Iran in the near future to boost trade ties with the country.

He deemed Iran’s role throughout the region ‘significant’ and ‘effective,’ extending his appreciation toward the Islamic Republic for its support of Spain’s non-permanent membership in the United Nation’s Security Council.

Calling the Swiss statement an important forward step in the course of the nuclear talks, the Spanish PM maintained the finalization of Iran’s nuclear deal by the end of June bears great significance.