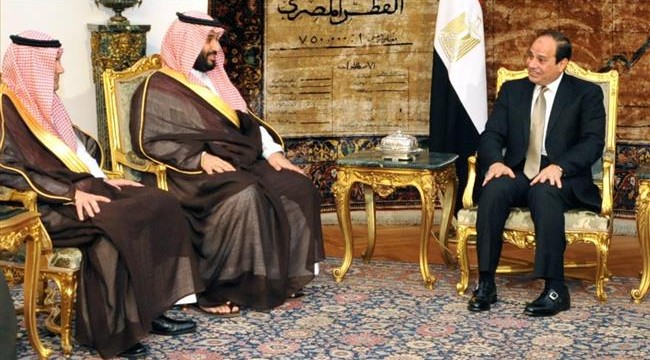 As Riyadh’s airstrikes against Yemen continue unabated, Egypt and Saudi Arabia have agreed to form a committee to consider plans for a joint military drill along with unspecified Persian Gulf states.

The Egyptian presidential office said in a statement that the agreement was reached in a meeting between Egyptian President Abdel Fattah al-Sisi and Saudi Defense Minister Prince Mohammed bin Salman in Cairo on Tuesday.

“It was agreed to form a joint military committee to discuss the implementation of a major strategic maneuver in the territory of the Kingdom of Saudi Arabia, with the participation of a joint Arab force which includes troops from Egypt, Saudi Arabia and the [Persian] Gulf states,” the office statement read, without giving any further details.

The Egyptian air force and navy have already been cooperating with Saudi Arabia in its military aggression against Yemen.

A number of other Arab countries along with the US are also providing support for Saudi Arabia in the aggression against Yemen, where Popular Committees backed by the Houthi Ansarullah movement are battling al-Qaeda militants.

The Saudi military aggression has caused the already dire humanitarian situation in Yemen to worsen. More than 2,600 people have been killed in the aggression so far.

The Houthis, now part of the Popular Committees advancing in the country, took over state matters after accusing the then government of Abd Rabbuh Mansur Hadi of failing to properly contain terror and corruption in the country.

This photo taken on January 1, 2013 shows Saudi jet fighters performing during a ceremony at the Riyadh military airport. (© AFP)

Hadi, a close ally of Riyadh, subsequently fled Yemen to Saudi Arabia, which launched aerial attacks against Yemen without a UN mandate.

The Saudi war has raised concerns among international aid organizations, which have called for a safe passage into Yemen to send much needed medical and humanitarian supplies.

The resolution, which had been drawn up by Jordan and the Arab states of the Persian Gulf, was adopted in the 15-member Security Council with 14 yes votes. UN heavy-weight Russia abstained. The document called for an immediate ceasefire, access to humanitarian aid to the victims of the Saudi airstrikes and ensuring the safety of civilians but stopped short of condemning the non-UN-sanctioned Saudi war.

Meanwhile, Iran has strongly opposed the illegal Saudi war on Yemen. The Islamic Republic has called for a peaceful resolution of the crisis in Yemen and has submitted a four-point peace plan aimed at ending the war against the impoverished Arab country to the UN.