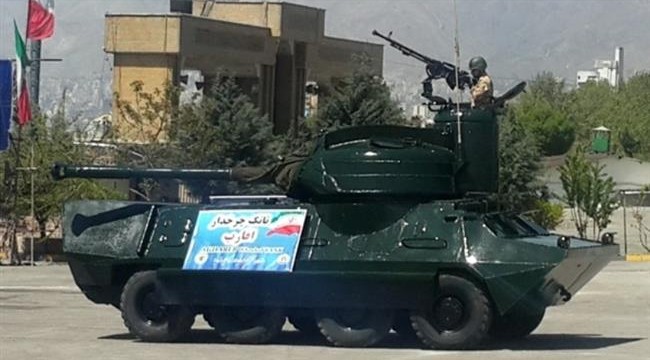 The military hardware unveiled on Wednesday in the presence of Commander of the Iranian Army’s Ground Forces Brigadier General Ahmad Reza Pourdastan included the Aqareb wheeled battle tank and a robot as well as Baher and Shaher sniper guns.

The eight-wheeled Aqareb tank is equipped with a 90 mm-caliber cannon and can carry four military personnel.

Also, the robot unveiled is a 4×4 one capable of carrying two missiles and a load of up to 600 kilograms. The robot can carry out programmed operations and manage time.

Baher, a 23 mm-caliber anti-aircraft gun, is also capable of penetrating bulletproof vests. It weighs 62 kilograms, has a range of four kilometers and is operated by a crew of three personnel.

Shaher is a 14.5mm sniper rifle, which has a maximum effective range of three kilometers. The 24-kilogram weapon is operated by three personnel.

Among the military hardware unveiled on Wednesday was an ultra-light combat vehicle which can travel with a speed of 100 and 130 kilometers per hour in side roads and gravel roads respectively.

The single-seat vehicle weighs 4 tonnes and has an effective operational radius of 400 kilometers.