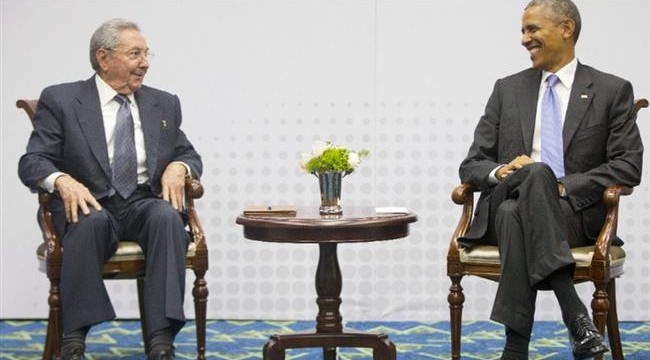 Obama returned to Washington early Sunday still basking in the attention from his historic meeting with Cuban President Raul Castro at a summit of Western Hemisphere leaders. But Obama is certain to find a less appreciative crowd in Congress than the one he left behind at the Summit of the Americas in Panama.

To complete a nuclear agreement with Iran, Obama must deal with resistance in Congress and the unpredictability of the Iranian leadership, which has a distinctly different interpretation of what the sides have settled on so far.

Cuba and Iran offer Obama, whose term ends in early 2017, the potential for legacy-crowning achievements. Iran may prove a greater challenge than Cuba, but together they are subjecting Obama’s foreign policy to the kind of scrutiny that most international issues, short of war, rarely draw.

Obama made clear in a closing news conference late Saturday in Panama City that he believes he can handle the twin trials. The American public is on his side on Cuba, the president said, and he had tough words for Republicans defying him on Iran.

Both have their roots in decades of grievances. Both have had constituencies in the U.S. deeply mistrustful of the governments with which Obama is dealing. Pro-Israel Americans cannot fathom a deal with an Iran that will not recognize Israel’s existence. And for long, Cuban-Americans who escaped Fidel Castro’s revolution could not imagine a U.S. government not committed to ousting the Havana government.

On the flip side, Cuba is hardly the threat Iran could be. Public opinion no longer demonizes Cuba. In the end, Obama’s efforts to re-establish normal relations looks like the lesser burden.

When it comes to Cuba, “the American people don’t need to be persuaded,” Obama said.

Still, there are reminders that the barriers have not all fallen.

Castro, in a lengthy speech at the summit, recited a litany of objections to past U.S. policies. And the room where Obama and Castro met displayed no flags, thus declaring the absence of diplomatic relations.

Obama’s next step is removing Cuba from the United States’ list of state sponsors of terrorism. Such a decision, recommended by the State Department, could come in days. Obama would have to notify Congress. Lawmakers do not have to ratify the decision, but they have 45 days to disapprove it.

Such a vote, if attempted, probably would not succeed. But the issue is percolating just as 2016 presidential candidates are jumping into the race.

Florida, once the center of anti-Castro activism, is a pivotal presidential state, and some Republican candidates will try for a political upper hand by accusing Obama of weakening America’s place in the world.

“President Obama’s foreign policy has been one appeasement toward autocratic dictators, thugs, and adversaries after another,” Sen. Lindsey Graham, a South Carolina Republican toying with a presidential run, said amid news Obama was to sit down with Castro.

The White House hardly appears worried about the politics of Cuban diplomacy, given that support for ending more than 50 years of U.S. isolation of the island nation crosses party and geographic lines.

“`’Perhaps the most important difference is that while Iran is inherently a security issue, today Cuba is the opposite,” said Carl Meacham, a former senior Republican aide on the Senate Foreign Relations Committee who now is a director at the Center for Security and International Studies. “If he removes Cuba for the list of state sponsors of terror, President Obama will demonstrate that the United States can no longer reasonably look at Cuba as a threat to our own security.”

Iran and the world powers negotiating the deal have until the end of June to reach a final deal. Congress is angling to assert authority over the final agreement, and even some of Obama’s Democratic allies support that.

But Obama reserves most of his frustrations for Republicans and he singled out Sen. John McCain of Arizona, his 2008 presidential rival, for specific scorn during Saturday’s new conference.

McCain last week declared a major setback in the nuclear talks after Iran’s supreme leader demanded that sanctions against Tehran had to be lifted immediately after a deal went into place.

Obama cast McCain’s criticism as an assault on the credibility of Secretary of State John Kerry.

“Now we have a senator suggesting that our secretary of state is purposefully misinterpreting the deal and giving the supreme leader of Iran the benefit of the doubt in the interpretations,” Obama said. “That’s not how we’re supposed to run foreign policy, regardless of who is president or secretary of state.”