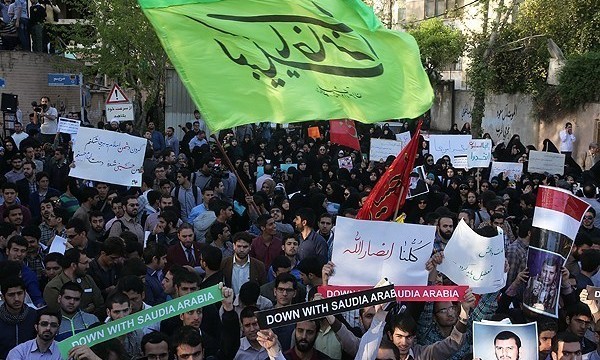 TEHRAN (FNA)- Iranian university students staged a protest rally in front of the Saudi embassy in Tehran on Monday to condemn the Saudi aggression against Yemen and Jeddah airport police insult to the Iranian pilgrims, including the sexual abuse of two teenagers.
Earlier this month, two Iranian teenagers were sexually abused by the Saudi police in Jeddah Airport as Saudis’ insolence towards Iranian Umrah pilgrims in Mecca and Medina has increased recently.

The protestors called on the Saudi authorities to punish those behind the sexual abuse against the two Iranian teenage boys, and asked the Saudi King Salman to apologize to the Iranian nation for the aggressive move.

The Iranian university students in their final statement which was read out at the end of their protest gathering in front of the Saudi embassy urged Iranian President Hassan Rouhani to take serious action and defend the dignity of the Iranian nation.

The protesters also condemned the Saudi-led aggression against Yemen, and said that the Saudi-led airstrikes on Yemen take place at the order of the US and Israel to undermine the worldwide Muslim community.

The angry protestors chanted slogans against the Saudi regime, and called for halting the Iranians’ visit to Saudi Arabia for Umrah pilgrimage to Mecca.

“Today, the Iranian nation has gathered in front of the ISIL-affiliated Saudi embassy to show solidarity with the two Iranian teenagers who were insulted, to make the al-Saud hear our protest, and they demand the embassy’s closure within the next 48 hours and immediate expulsion of the Saudi embassy’s charge de’ affairs,” a statement issued by the protestors said.

Earlier today, Iranian Culture Minister Ali Jannati said that the Umrah (minor) Hajj pilgrimage to Saudi Arabia has been suspended by Iran in reaction to the Saudi officials’ growing insults to Iranian nationals.Speaking in a local gathering, Jannati underscored that the Hajj and Pilgrimage Organization has been ordered to suspend all of Umrah (minor) Hajj pilgrimage to as of Monday until the Arab country punishes the perpetrators behind the sexual assault on two teenager Iranian Hajj pilgrims.

“A large number of Iranian senior clerics have voiced their concerns over this issue and believe that the Saudi officials usually deal with the Umrah pilgrims in inappropriate ways,” he added.

Jannati underscored that the Saudi government had promised capital punishment or even execution for those who offended the Iranian youth pilgrims at Jeddah Airport, but so far noting has been made in that end.

Iran lodged complaint with the Saudi government against the policemen involved in sexual harassment of the two Iranian teenage boys at the Jeddah airport.