U.S. widens role in Saudi-led campaign against Houthis in Yemen

The U.S. is expanding its role in Saudi Arabia’s campaign in Yemen, vetting military targets and searching vessels for Yemen-bound Iranian arms amid growing concerns about the goals of the Saudi-led mission, according to U.S. and Arab officials.

U.S. officials worry mounting civilian casualties will undermine popular support in Yemen and in other Sunni Arab countries backing the campaign. At least 648 civilians have been killed since the intervention began, and Saudi-led strikes have hit hospitals, schools, a refugee camp and neighborhoods, according to U.N. officials. The Saudis have blamed the Iranian-backed Houthi rebels and their Yemeni allies for civilian casualties and said they were doing their best to limit them.

Saudi officials have said they aim to degrade the military capabilities of the Houthi rebels who have overrun much of Yemen and to restore President Abed Rabbo Mansour Hadi to power after militants forced him to flee the country.

The Obama administration is skeptical the airstrikes will reverse the Houthi gains. Worried by the risk of more direct intervention by Iran, U.S. officials say they are urging the Saudis to set their sights more narrowly on halting rebel advances and reaching what amounts to a battlefield stalemate that leads all sides to the negotiating table.

The campaign has made one of the world’s poorest countries the center of a regional proxy fight with high stakes for the Obama administration. The April 2 framework agreement that the U.S. and other world powers reached with Shiite Iran to trade sanctions relief for limits on its nuclear program has prompted the Saudis and their Sunni Muslim allies to resist what they see as Iran’s efforts to impose its influence in the Middle East—often along sectarian battle lines.

Prince Saud Al Faisal, the Saudi foreign minister, underscored the tensions on Sunday, telling reporters his country is “not at war with Iran” in Yemen. But he demanded Iran end its political and military support for the Houthis, who adhere to the Zaidi offshoot of Shiite Islam. 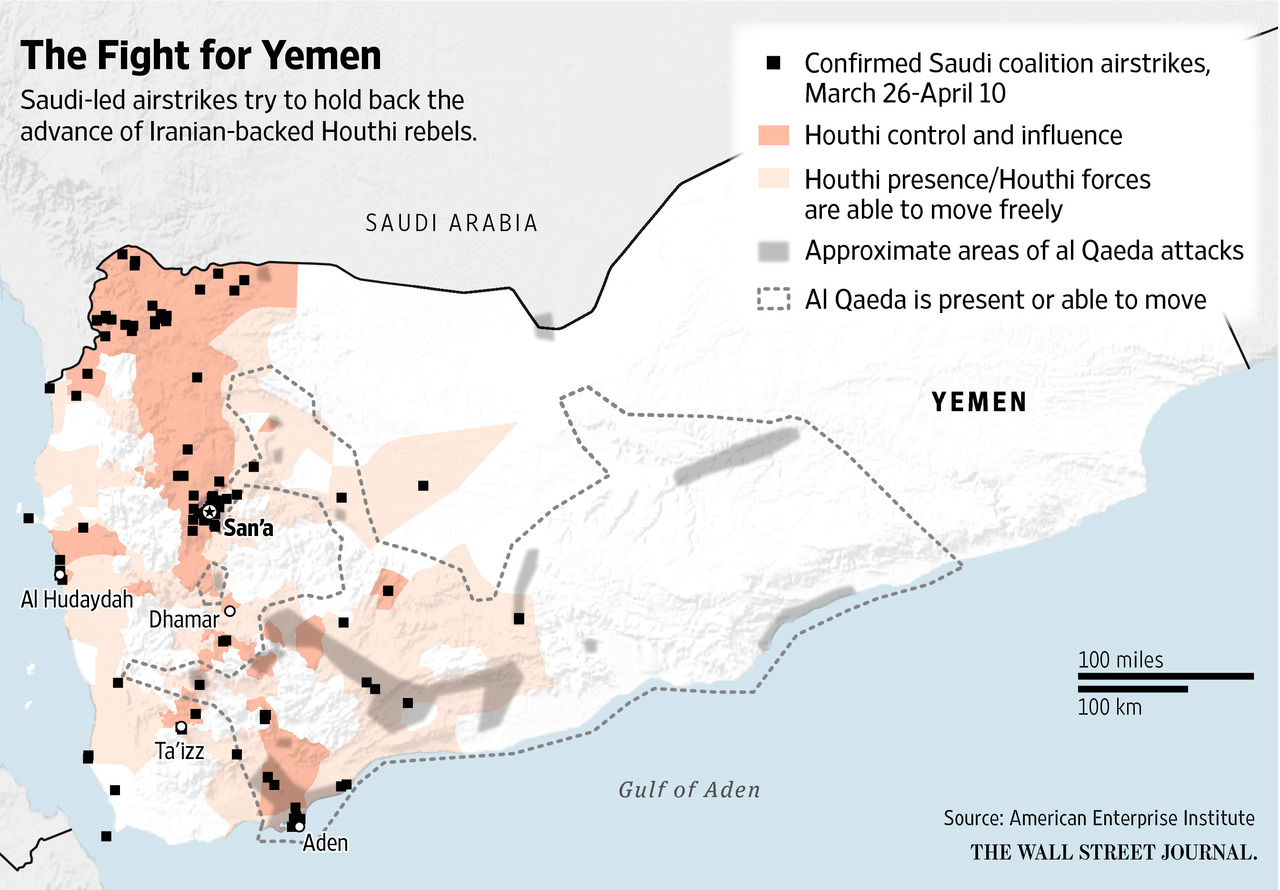 Iran denies allegations by U.S. and Saudi officials that it has been arming, training and funding the Houthis for years. Nevertheless, the U.S. Navy, backing a Saudi naval blockade of Yemen’s ports, has intensified a search for weapons on the seas near Yemen’s coast. Iran is trying to supply the Houthis with surface-to-air missiles, a senior U.S. defense official said.

On April 1, sailors on an American destroyer in the Red Sea halted a Panamanian-flagged freighter suspected of delivering Iranian weapons to the Houthis and searched the vessel. Although the search came up empty, it marked the navy’s first boarding operation in an expanding campaign to thwart the Houthis.

U.S. officials have grown concerned that some Saudi leaders may be shifting their war aims, wanting to bomb the rebels back to their base in the country’s north, according to officials involved in the discussions. Such an extended campaign could take a year or longer, according to U.S. intelligence assessments.

In recent meetings, Saudi officials have told their American counterparts they want the air campaign to be decisive and don’t want to take half-measures because they believe the Houthis will use any pause to regroup and restart their offensive later, according to officials on both sides.

Saudi officials say they don’t want to pull the plug on the air campaign prematurely, arguing that Yemen is a “tribal society which respects the strong.”

The White House has counseled the kingdom to stick to a more limited set of bombing targets and political objectives to avoid getting mired in an open-ended campaign, according to U.S. and Arab officials.

U.S. officials want to find a quick diplomatic exit to the fighting—one that enables the U.S. to restore its counterinsurgency operations in the country and resume drone strikes against Yemen-based al Qaeda in the Arabian Peninsula. Those operations were curtailed by the fighting last month.

Western and Arab officials say they worry that Yemen’s military over time could be so degraded by a prolonged Saudi air campaign that it would be unable to provide the stability needed for a political transition.

About a week before its campaign started, Saudi Arabia’s ambassador to Washington, Adel al-Jubeir, provided a preliminary Saudi list of high-priority targets in Yemen to Central Intelligence Agency Director John Brennan, according to U.S. officials. Mr. Jubeir wanted the U.S. to review the more than 100 high-value targets, including military bases used by Yemeni forces fighting alongside the Houthis, according to U.S. officials.

When Mr. Jubeir presented the list to Mr. Brennan, the White House had yet to decide on the extent to which the U.S. would assist in the Saudi air campaign. But U.S. officials said the White House authorized Pentagon war planners to check the targets against U.S. intelligence and to provide feedback to the Saudis to inform their initial strikes.

Pentagon war planners concluded some of the would-be targets were of little military value, while others had a high potential to cause civilian casualties because of their proximity to population centers. U.S. officials then conveyed those concerns to the Saudis. Saudi officials say they amended the target list after reviewing the Pentagon’s feedback.

Mr. Jubeir declined to comment on his communications with Mr. Brennan about targets and defended the operation in an interview.

“The objective is protect the legitimate government, defend the Yemeni people, and degrade and destroy the capabilities of the Houthis that could be a threat to Saudi Arabia,” he said. “The ultimate objective of the military operation is to open the door for a political process to resolve Yemen’s problems.”

During the initial round of Saudi strikes, the U.S. limited intelligence sharing with the Saudis, as it reviewed its role. The U.S. provided some satellite imagery, but stopped short of picking targets for them.

In recent days, the U.S. has increased intelligence-sharing with the Saudis, providing them with direct targeting support for sites the kingdom wants to bomb, according to U.S. officials.

Under the new arrangement, the Saudis pick their own targets, and then provide that information for review to Pentagon war planners at a joint operations center.

U.S. military and intelligence analysts study the would-be target sites and then provide their analysis to the Saudis about how they think Saudi commanders can make those strikes more effectively, such as by identifying specific locations where the U.S. believes the bombs should be dropped.

U.S. officials say the review system allows them to warn the Saudis away from potential targets if there is a high potential for collateral damage or if a strike could inadvertently destroy critical infrastructure.

“The United States is providing our partners with necessary and timely intelligence to defend Saudi Arabia and respond to other efforts to support the legitimate government of Yemen,” said Alistair Baskey, a White House National Security Council spokesman.

In some cases, Saudi strikes are launched before the U.S. can review the targets because the Saudis believe they are time sensitive, the officials said.

The Saudi campaign is still focused on trying to slow the Houthi advance, U.S. officials said. And the kingdom’s fighter planes aren’t in a position to go on the offensive against bands of Houthi rebels on the battlefield because the Saudis don’t have the intelligence or advanced military equipment to do so effectively.