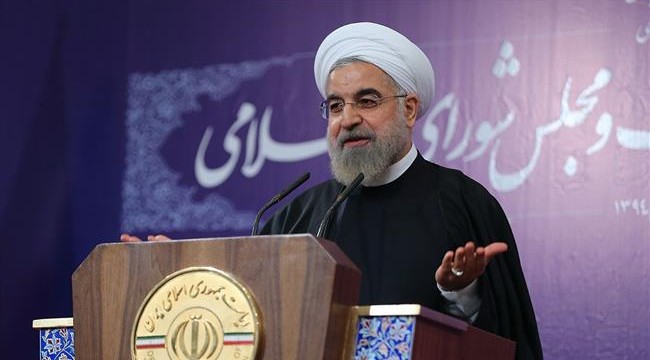 Taking a more cautious line than in his previous statements, President Rouhani said on Sunday that there is a “tough road ahead” for Iran and the 5+1 Powers to complete a comprehensive nuclear deal.

Rouhani told members of his Government and MPs that the nuclear framework, set out on April 2 after months of intense talks, is only the beginning of a “long and complicated” process for a final resolution by a June 30 deadline.

The President maintained the pose that Iran will only reach an accord from strength, rather than giving way to the pressure of sanctions:

The assumption that the US and the EU [European Union] are big powers and therefore can do anything is wrong. And their reputation and prestige would be jeopardized in case they violate their commitments. Our diplomats, legal experts, and politicians are formidable and the other side could not overpower us….

The other side clearly knows that this government and nation are not used to submissiveness.

Boosted by Saturday’s endorsement of the framework by the Revolutionary Guards, Rouhani was given further support by Speaker of Parliament Ali Larijani’s praise for the nuclear negotiators: “One of the nuclear talks’ achievements is resolving a fabricated negative atmosphere against Iran.”

Undercutting the standard regime line, a senior Iranian official has said that there will be no sudden recovery in oil exports after a nuclear deal.

Mohammad-Ali Khatibi, Iran’s former governor to OPEC, told the Iranian Students News Agency, “There will be no sudden return of the clients. There will not be an overnight increase in exports.”

Khatibi explained that some key customers have annual deals with other suppliers and cannot suddenly revoke them to turn to Iran.

Iran’s exports have been depressed by more than 40% since US-led sanctions took full effect in 2012.

Jason Rezaian, the Washington Post reporter imprisoned in Tehran for almost nine months, isaccused of passing on sensitive economic and industrial information about Iran, according to Fars News.

Fars said Rezaian faces “security” charges in the Revolutionary Court but no trial date has been set. It claimed he had passed the information to unnamed Americans.

Rezaian was arrested July 22 along with his wife, reporter Yeganeh Salehi, and two other journalists in a raid by security forces. The other journalists were soon released and Salehi was freed on bail in October.

Rezaian’s family say he has been denied his choice of lawyer and has not been given information about the specific charges against him.