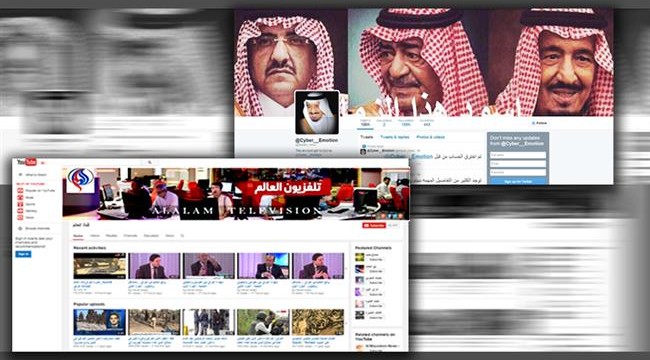 In a premeditated move, Saudi hackers posted fabricated news on the homepage of al-Alam Twitter account about the killing of Leader of Yemen’s Houthi Ansarullah movement, Abdul-Malik al-Houthi, and Ahmed Ali, son of the former Yemeni president Ali Abdullah Saleh, in an air raid.

“Al-Alam’s professional activities regarding Saudi Arabia’s aggression of Yemen in recent weeks have caused the Saudis to be greatly furious with this network,” the channel’s website said.

The hackers posted several tweets containing the names and contact details of al-Alam’s correspondents across the Middle East.

Al-Alam officials said efforts are still underway to take back control of the hacked accounts.

Al-Alam is one of leading foreign-language news channels operated by the Islamic Republic of Iran Broadcasting (IRIB) which also runs the English-language Press TV and the Spanish-language HispanTV.

Saudi Arabia’s air campaign against Yemen started on March 26 without a UN mandate in a bid to restore power to Yemen’s former fugitive president, Abd Rabbuh Mansur Hadi, a close ally of Riyadh.

According to sources close to the ruling Ansarullah movement, at least a thousand people, including 200 children, have been killed in Yemen since the beginning of Saudi aggression.