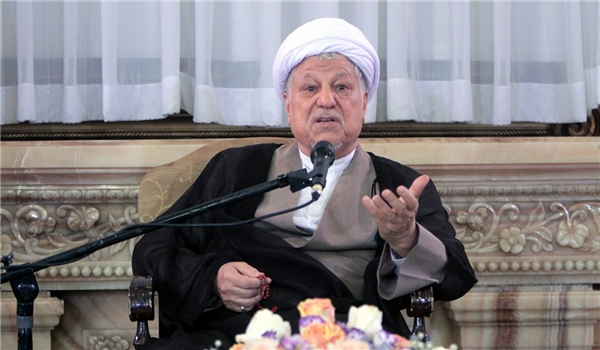 Rafsanjani says Yemen to be quagmire of aggressors

Tehran, April 11, IRNA – Expediency Council Chairman Ayatollah Akbar Hashemi Rafsanjani said on Saturday that Yemen will turn into a quagmire for the aggressors.

Rafsanjani told the first session of the Expediency Council in new year that Yemen crisis and Saudi aggression on Yemen and provoking religious discord between the Shia and Sunni Muslims is very dangerous and is a prelude to further war and bloodshed in the region.

He voiced serious concern about the enemies’ efforts to stir Shiaphobia in the region, especially in Yemen, and said the deterioration of the humanitarian situation and fully wrong analysis are in line with goals of the enemies of Islam because Yemen problems are deep rooted and have long historical record.

Ayatollah Rafsanjani said that Saudi aggression on Yemen through assistance of several Arab countries is a grave and strategic mistake.

Ayatollah Rafsanjani said that hardworking, resistance, perseverance of the people form the population and beliefs of Yemen, defending their country’s territorial integrity, beliefs, religious and national dignity, willing to stand united and integrated.

‘Unfortunately, the inexperienced Saudi officials have suffered grave mistakes in calculation and political and military analysis of the Yemeni situation, entering into a devastating war without study and without taking into consideration the adverse consequences of igniting flames of war in the region by forming a fragile and faulty coalition. So, the Wise men in the countries are expected to stop war and aggression on Yemen as soon as possible, preventing continued inferno of the inexperienced individuals.’

Referring to the strategic importance of Bab-el-Mandeb, the Red Sea and Aden Gulf for peace and calm in the region, Ayatollah Rafsanjani urged the United Nations, the neutral countries and the wise men in the region to step in and extinguish flames of war in Yemen and the strategic regions through political means and negotiations.

He emphasized that Iran will in turn be ready to extend any kind of cooperation to the global and regional associations and end conflict in Yemen and the entire region.

Elsewhere in his remarks, Ayatollah Rafsanjani strongly condemned the tragic event in the case of two young Iranian individuals in Jeddah and said that marks a big fiasco for the Saudi system and the country’s security establishment. Regarding disgrace at the Saudi airport.

Also referring to the nuclear talks in Lausanne and the joint statement issued by Iran and G5+1, Ayatollah Rafsanjani cited remarks the Supreme Leader about the framework agreement.

‘We hope the negotiating team, which has successfully left the outlines behind, will regulate and compile the details through all-out study and vigilance, thus honoring dignity and due nuclear rights of the Islamic system and people.’

He said the time left up to discussion on details and reaching final accord is a highly sensitive and important period. He added that the hostile countries and enemies will within the period lay mines on the way and the opposition worldwide will double the pressure, he added.