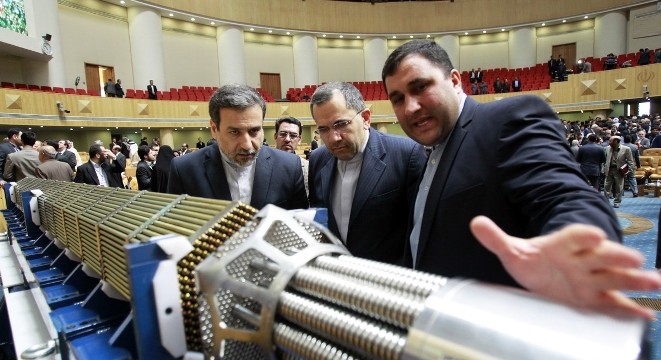 A number of domestically manufactured products representing the country’s latest nuclear achievements were unveiled during a ceremony in Tehran on Thursday in the presence of President Hassan Rouhani and some other top-level officials to mark National Nuclear Technology Day.
Three radioisotopes with medical applications and an “indigenous” virtual nuclear fuel assembly were among the products unveiled by Rouhani.
In his address to the event, Rouhani congratulated Iranians on the successes achieved in the field of nuclear technology.
Referring to the joint statement issued on April 2 to announce an outline understanding reached between Iran and the major powers after eight days of intense negotiations in the Swiss city of Lausanne over Tehran’s nuclear work, Rouhani said, “What we achieved in the talks was not simply a released statement.”
“What has come along (with the talks) over the past fifteen months of talks has been the US president’s explicit acknowledgement that they have come to realize that the Iranian nation will not cave in to sanctions and force.”
“We do not aim to defeat anyone in the talks,” he noted, adding, “We are seeking to restore our rights and (lead the talks to) a win-win result that is to the benefit of us, the region and the world.”
Rouhani repeated Iran’s resolve not to give up its rights to access nuclear technology and to continue its research and development program “in line with national objectives”.
“We regard the (prospective) nuclear deal as the first step to establish constructive interaction with the world, which will be in the interest of the West, East and the region.”
He urged an end to the Saudi-led attacks on Yemen and called for greater cooperation among regional countries to help promote friendly and brotherly relations and restore peace and stability to the region.