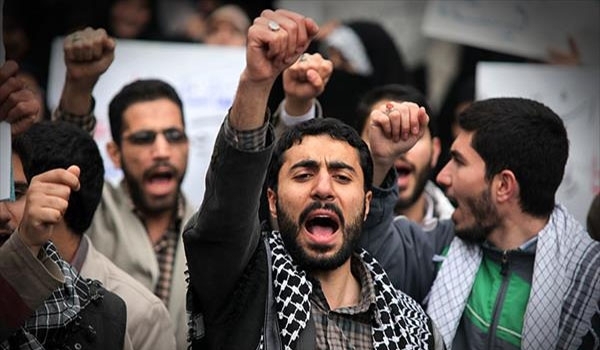 TEHRAN (ISNA)- Large crowds of Iranian protesters gathered in front of Saudi embassy in Tehran on Saturday, calling for shutting down the complex, following harassment of two Iranian teenage pilgrims in Jeddah Airport.

The protesters chanted ‘The God is Great’ and categorically condemned the harassment.

They also called for pursuit of the teen pilgrims’ harassment and punishment of the two officials in Jeddah Airport who were behind the act.

In a letter to the Iranian President Hassan Rouhani, 18 Iranian parliamentarians have called for serious diplomatic measures with the government of Saudi Arabia over the sexual abuse against two Iranian teenage pilgrims by Jeddah airport security forces and urged prosecution of the two Saudi securities.

The airport officials reportedly separated two Iranian teenage boys from other members of their group who were returning from their pilgrimage under the pretext of suspecting them, and sexually assaulted them.

During the inspection, the rest of the group noticed the officers intend to sexually harass the two teenagers and informed the authorities of the issue.