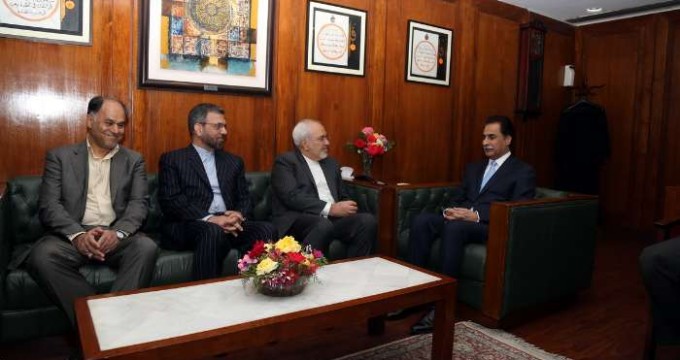 The Iranian minister stressed that Muslim leaders should play their role for bringing the Islamic community on the same stance to counter common threats and challenges.

He made the remarks in a meeting with Speaker of Pakistan’s National Assembly Sardar Ayaz Sadiq in Islamabad on Thursday.

Zarif, who is paying a two-day official visit to Pakistan, expressed his confidence that “collective efforts” by Muslim countries would lead to a peaceful resolution of the ongoing crisis in Yemen.

Ayaz Sadiq, for his part, underlined the need for unity among Muslim countries to fight the challenges.

The Iranian top diplomat also held a meeting with Pakistani Army Chief General Raheel Sharif on Thursday, during which he once again urged an immediate end to the ongoing Saudi military attack on Yemen.

“The past experiences show that the consequences of the military intervention in Yemen will become part of the problems,” Zarif added.

During the meeting, he also explained Iran’s solution to the crisis in Yemen as including an immediate cease-fire, relief and rescue – particularly sending medical aid and food as well as helping the injured -, providing the ground for Yemeni-Yemeni dialog, and the formation of an inclusive government.

Zarif’s visit to Pakistan comes days after Pakistan’s defense minister revealed that Saudi Arabia has asked Pakistan to join the military aggression on Yemen by deploying its warplanes, warships and soldiers. However, not a single Pakistani lawmaker has spoken in favor of sending troops.

Saudi Arabia and some of its Arab allies on March 26 began to militarily interfere in Yemen’s internal affairs by launching deadly air strikes against the Houthi Ansarullah movement in an attempt to restore power to fugitive Yemeni President Abd Rabbuh Mansur Hadi, a close ally of Riyadh.