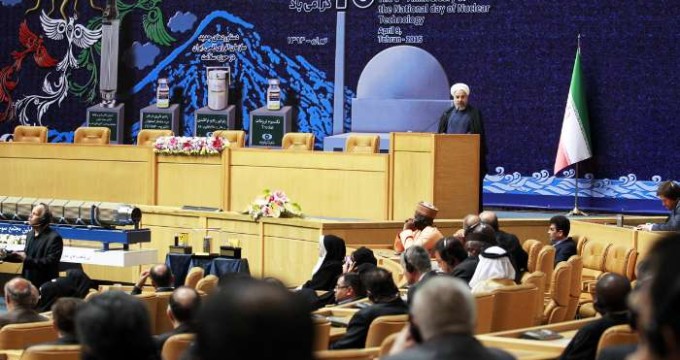 Tehran, April 9, IRNA – President Hassan Rouhani said on Thursday that the real triumph of the Iranian people in the nuclear talks with the world’s six powers – known as the P5+1 – was resisting against pressures, sanctions and excessive demands.

The president made the remarks during a ceremony in Tehran on Thursday to mark the 9th National Nuclear Technology Day.

‘What was achieved in the nuclear talks is not that a statement was issued,’ Rouhani said, adding that the true achievement of the alks during the past 15 and 16 months is what was mentioned by the US president openly. ‘He said,’ Rouhani added, ‘We have come to the conclusion that the Iranian nation will never surrender to pressure, sanction and excessive demands.’

The presdient believed that was ‘a great victory for the Iranian people that world’s biggest military and economic power admits Iran’s resistance to pressure.’

President Rouhani added, ‘The US president has announced and admitted that Iran’s political system cannot be overthrown and that the nature of Iran’s establishment which is a religious democratic system cannot be changed.’