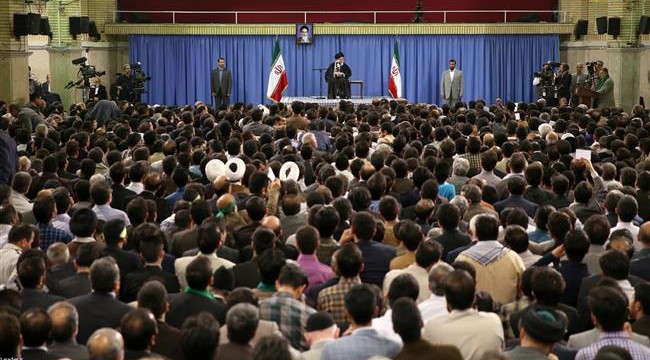 Leader: No room for taking stance on nuclear issue

The Supreme Leader of the Islamic Revolution said Thursday that he is neither for nor against the nuclear issue [a reference to the agreement Iran and P5+1 arrived at in Lausanne last week].

Negotiator: Next round of Iran nuclear talks may be held in New York

Delegations from Iran and six world powers will likely held a new round of talks on Tehran’s nuclear energy program at the level of deputy foreign ministers in the US city of New York, a senior Iranian negotiator said.

Everything lies in details, says Leader on nuclear talks

Leader of the Islamic Revolution Ayatollah Seyyed Ali Khamenei says it is the very specifics of the nuclear negotiations between Iran and six world powers that would determine the fate of the talks.

The two Saudi officers who had sexually harassed two teenage Iranian pilgrims at the King Abdulaziz International Airport in Jeddah have been arrested, a senior Iranian diplomat says.

Iranian President Hassan Rouhani called on Saudi Arabia to halt a two-week-old campaign of air strikes against Houthi fighters in Yemen and said countries in the region should work to bring Yemen’s rival factions to the negotiating table.

Iranian scientists manufactured a fuel assembly which is practically utilizable in the reactor of the Bushehr nuclear power plant, but its pellets are made out of lead, Chief of the Atomic Energy Organization of Iran (AEOI) Ali Akbar Salehi said on Thursday.

Iran will agree to a final nuclear accord with six major powers only if all sanctions imposed on the country over its disputed nuclear work are lifted, President Hassan Rouhani said in a televised speech on Thursday.

The European Union measure to re-impose sanctions on an Iranian bank and 32 shipping companies is “unconstructive”, Iran says.