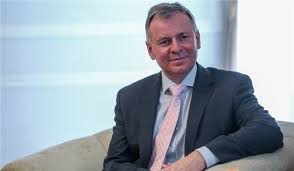 “Austria is very interested in expanding its relations with Iran in different areas,” Stift said in a meeting with Qazvin Governor General in the city of Qazvin on Wednesday.

The Austrian ambassador reminded that Tehran-Vienna relations date back to 500 years ago, when the two sides exchanged correspondence, adding that between 40,000 to 60,000 Iranians are living in Austria now.

He pointed to the upcoming visit of Austrian President Heinz Fischer to Iran, and said, “The Austrian president has received his Iranian counterpart Hassan Rouhani’s official invitation to visit Iran and we are optimistic that the visit will take place in the second half of 2015.”

On Tuesday, Stift voiced his country’s enthusiasm for extensive cooperation with Iran in medical and health fields.

“We will have broader, more serious and more legal cooperation with Iran in the medical field,” Stift told reporters after signing a memorandum of understanding (MoU) with Tehran.

He noted that the Iranian MoU was signed because there are a large number of Iranian physicians in Austria.

There has been a friendly relation between Iran and Austria during past years and, on many occasions, the two countries’ official have stressed expansion of mutual cooperation between the two nations in various fields.

In November 2013, the Iranian and Austrian deputy foreign ministers stressed the need for the further development of the relations between the two friendly nations.

Iranian Deputy Foreign Minister for European and American Affairs Majid Takht Ravanchi and his Austrian counterpart Reinhold Lopatka, in a meeting in Tehran, expressed hope that the relations between Tehran and Vienna would witness further enhancement in all sectors.

The Austrian official pointed to the long-standing relations between Iran and Austria, and in the meantime, termed the meeting between Austrian President Heinz Fischer and his Iranian counterpart Hassan Rouhani on the sidelines of the UN General Assembly in New York as highly positive and expressed hope that bilateral ties would increase under Rouhani’s tenure.

He added that the two countries should use their potentials to boost mutual cooperation.

Takht Ravanchi, for his part, said that good relations and bilateral cooperation between the two countries would serve the interests of Tehran and Vienna.

He also said that the two countries could shore up ties in political, parliamentary, economic and cultural fields.