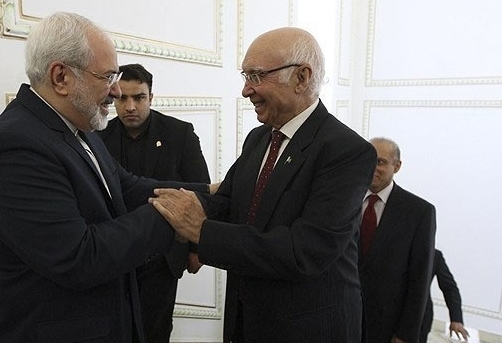 Zarif confers with his Pakistani counterpart

Islamabad, April 8, IRNA – Foreign Minister Mohammad Javad Zarif held talks with his Pakistani counterpart Sartaj Aziz on bilateral as well as the most important regional issues, such as the current problems in the Middle East.

In the meeting Zarif and Sartaj Aziz discussed necessity of strengthening all-out cooperation between Tehran and Islamabad as well as regular consultations to settle political and diplomatic issues of the region.

Upon his arrival to the Islamabad airport, Zarif told reporters that Pakistan is an important and effective country in the region and Iran believes in consultations with Pakistan to settle current problems in the region.

He expressed deep concern that the two countries are facing with extremism and terrorism and underlined that Tehran and Islamabad need to strengthen their cooperation for expansion of ties and settlement of mutual problems.