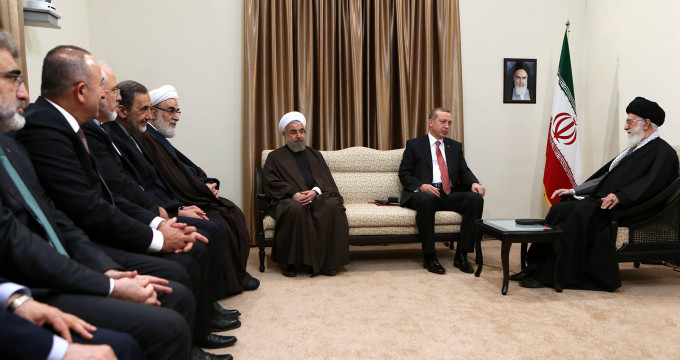 TEHRAN (Tasnim) – Turkish President Recep Tayyip Erdogan said he does not consider the Islamic State in Iraq and the Levant (ISIL) terrorists as a Muslim group and condemns their crimes.
“I do not consider Daesh (the Arabic acronym for the Islamic State of Iraq and the Levant) as Muslim and have also opposed them,” Erdogan said at a meeting with Supreme Leader of the Islamic Revolution Ayatollah Seyed Ali Khamenei here in Tehran on Tuesday.

He further underlined that he condemns the group’s crimes.

Erdogan also underlined the necessity to resolve the Islamic world’s problems by Muslim nations and without the West’s intervention.

“There are many problems in the region and we should jointly remove them and we should not wait for the West (action) to resolve these problems.”

Also at the meeting, Ayatollah Khamenei said the US and Zionists are happy today about the internal rifts among Muslim countries, and called on the Islamic states to “boost cooperation and take proper and constructive practical measures” to resolve these differences.

The Leader further pointed to the regional developments and the brutalities committed by ISIL terrorist group and said Zionists and the US are happy about the events and do not want to end the problem created by ISIL.