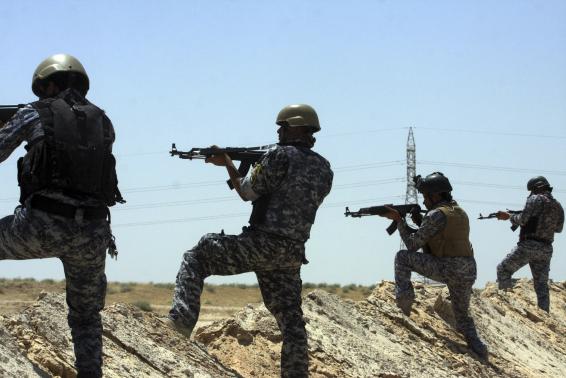 Iraqi security forces have engaged members of the Takfiri ISIL militant group during two separate operations north of the recently liberated strategic city of Tikrit, killing a total of 43 the terrorists in the process.

The source said that the slain militants had been hiding in several houses across the area, adding that a senior commander of the pro-government Popular Mobilization units and a police officer were also killed during the heavy exchange of fire with the ISIL militants.

Separately, nine ISIL terrorists were killed in another encounter with Iraqi security forces in the Shuhada district of Hayy al-Qadisiyah region. A French citizen clad in an explosives-laden vest was among the militants killed in the gunfight.

Meanwhile, some 600 fighters from Bani Qais tribe are set to join government forces as well as Popular Mobilization units in the operation to take back the northern oil-city of Baiji, located some 210 kilometers (130 miles) north of Baghdad, from ISIL Takfiris.

Tikrit had been seized by ISIL in June last year. The city’s recapture now paves the way for the Iraqi army to take control of the country’s second-largest city and an ISIL stronghold, Mosul.

ISIL started its campaign of terror in Iraq in early June 2014. The heavily-armed militants took control of the city of Mosul before sweeping through parts of the country’s Sunni Arab heartland.

Iraqi soldiers, police units, Kurdish forces, Shia fighters and Sunni tribesmen have recently succeeded in driving the terrorists out of some areas in Iraq.