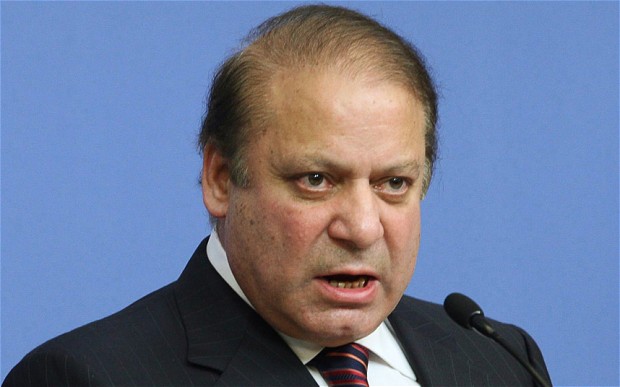 Pakistan PM says Iran should be involved in Yemen debate

(Reuters) – Pakistani Prime Minister Nawaz Sharif called on Tuesday for Iran to get involved in a debate on security in Yemen as parliament resumed debate on whetherPakistan should join a Saudi-led campaign against Iran-allied Yemeni forces.

Sharif addressed parliament a day after the defense minister revealed Saudi wanted Pakistani warplanes, warships and soldiers. Not a single MP has spoken in favor of sending troops.

Pakistani intervention would anger Shi’ite power Iran, which shares a long and porous border in a region roiling with its own separatist insurgency.

The Iranian foreign minister visits Pakistan on Wednesday and discussions on Yemen are expected to dominate the meeting. Sharif said he welcomed Iranian input.

“Iran should also join the discussion and evaluate whether their policy is correct or not,” Sharif said.

Sharif has repeatedly said he will defend any threat to Saudi Arabia’s “territorial integrity” without defining what threat that could be, or what action he would take.

Joining the Saudi-led coalition could inflame a sectarian conflict at home where about a fifth of the population is Shi’ite and attacks on Shi’ites are increasing, further destabilizing the nuclear-armed nation of 180 million people.

“If we get involved in Yemen, a huge blaze will once again erupt in our country,” veteran opposition lawmaker Ghulam Ahmed Bilour told parliament. “My army is not a rent-an-army,”

In the debate on Monday, Aitzaz Ahsan, Senate leader of the opposition, demanded that the government clarify its position.

“What does (Defense Minister) Khawaja Asif mean by the violation of sovereignty of Saudi Arabia and the strong response from Pakistan?” he asked. “If the government wants to send troops to Yemen or Saudi Arabia, what will their exact mandate be?”

The debate could last days.