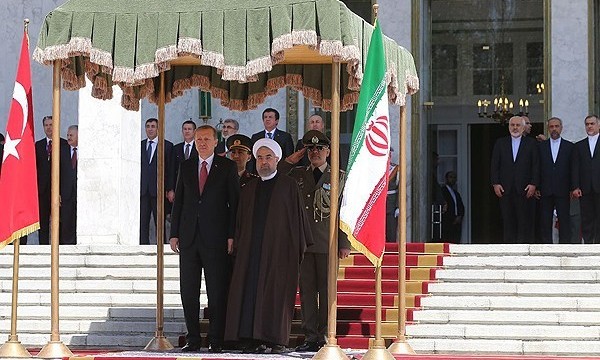 Erdogan says Iran, Turkey should use local currencies in trade

Iran and Turkey should start trading in their own currencies instead of dollars or euros to avoid foreign exchange volatility, Turkish President Tayyip Erdogan said on Tuesday.

According to a recent survey conducted by Islamic Republic News Agency (IRNA), 96.3% of Tehranis are grateful of efforts made by Iranian nuclear negotiating team led by Foreign Minister Mohammad Javad Zarif.

Iran’s Zarif due in Oman to discuss Yemeni crisis

Iranian Foreign Minister Mohammad Javad Zarif plans to leave Tehran for the Omani capital of Muscat on Wednesday to hold talks on a range of issues, including the latest developments in the crisis-hit Yemen.

Obama: Iran’s recognition of Israel not to be part of nuclear deal

President Barack Obama has rejected a call by Israel that any final nuclear agreement with Iran include a “clear and unambiguous Iranian commitment of Israel’s right to exist.”

Comments of FM, nuclear chief to be used to ease concerns: Larijani

Parliament Speaker Ali Larijani said Tuesday that explanations about nuclear talks by Foreign Minister Mohammad Javad Zarif and Director of the Atomic Energy Organization of Iran Ali Akbar Salehi offered in a closed-door session of the chamber will be considered in easing concerns [among MPs] about a final deal between Iran and P5+1.

Javad Karimi Ghodoosi, a member of parliament’s National Security and Foreign Policy Committee, said Tuesday, “The director of the Atomic Energy Organization and the foreign minister have offered promising explanations about part of Iran’s nuclear research and development over which a [tentative] agreement has been struck with P5+1 in Lausanne.

Iranian University Students are staging a sit-in in front of the parliament to voice protest at the results of several months of talks between Iran and the world powers as Foreign Minister Mohammad Javad Zarif is due to brief the lawmakers on the results of the Lausanne talks in today’s session.

Salehi: West forced to negotiate due to Iran’s nuclear capability

Head of the Atomic Energy Organization of Iran (AEOI) Ali Akbar Salehi said on Tuesday that the western states opted to try diplomacy and negotiations with Tehran because of Iran’s high nuclear capability.

Iranian nation made US opt for diplomacy: IRGC commander

Commander of the Islamic Revolution Guards Corps (IRGC) Major General Mohammad Ali Jafari praised the country’s negotiators for their efforts in nuclear talks with world powers and said Iran’s resistance forced the US to choose diplomacy and abandon war rhetoric against Tehran.