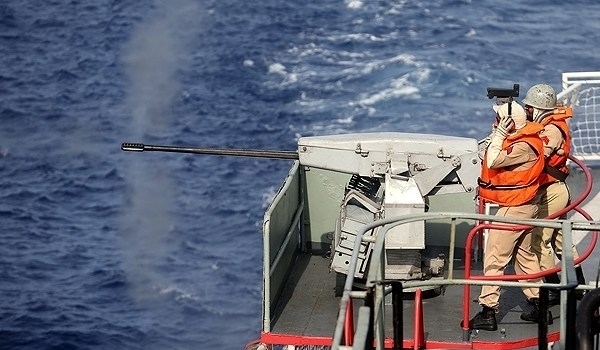 TEHRAN (FNA)- Iran’s 33rd fleet of warships exercised firing artillery shells at flying targets in the Sea of Oman last night in the last stage of its mission which took the flotilla to international waters.

Since one of the main missions of the Iranian fleets sent to the free waters is safeguarding the cargo ships and shipping lines against threats, specially pirate attacks, exercising the fire power and shooting down hostile flying targets is one of the most important operations during these missions.

During the nightly exercises by the Iranian warships, four 20-mm cannons of Bandar Abbas warship and the 40-mm and 20-mm artillery systems fired at mock flying targets.

The Iranian Navy’s 33rd flotilla of warships, which is comprised of martyr vice-admiral Naqdi destroyer and Bandar Abbas logistic warship for intelligence-gathering, operational and training missions, left Bandar Abbas port in Southern Iran for the Gulf of Aden late January to protect the country’s cargo ships and oil tankers against pirates.

Iran’s 33rd fleet of warships berthed in Cochin Port, India, on March 24. Earlier, the flotilla had docked in Tanjung Priok port of Indonesia and Colombo port of Sri Lanka in February.