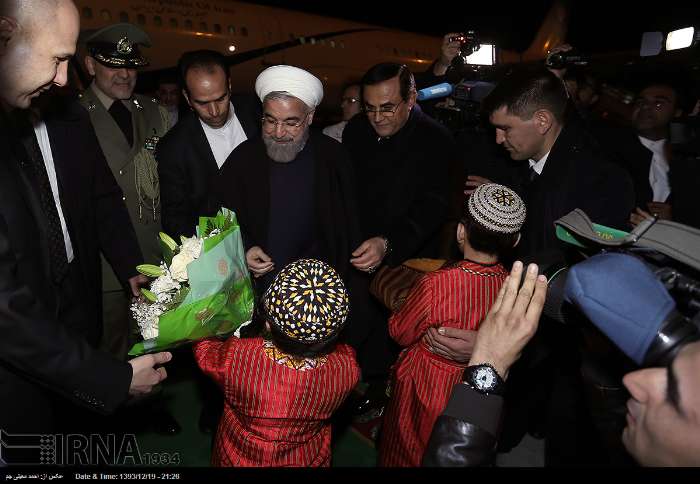 Did a door to Europe just open up for Central Asia?

The five Central Asian states have been independent for nearly 25 years and throughout that time — as talk continued about recreating the ancient Silk Road — there was always one direction that was off limits: the route through Iran.

But, judging by the encouraging news from negotiations between Tehran and world powers, that route might soon open and, if it does, it will have a dramatic effect on Central Asia.

RFE/RL’s Turkmen Service, known locally as Azatlyk, assembled a roundtable discussion to discuss the new opportunities for Central Asia if and when international sanctions on Iran started to be lifted.

Azatlyk director Muhammad Tahir moderated a panel that included Mohammad Boghrati of RFE/RL’s Radio Farda, Alex Vatanka of the Washington-based Middle East Institute, and Hussein Aryan, a London-based independent Iranian analyst. As usual, I also chimed in with some comments.

In terms of trade, Central Asia is ideally located geographically in the heart of the Eurasian continent, but geopolitically the region has been boxed in.

The southern trade route through Afghanistan has been practically impossible due to instability and Iran was effectively off limits. The Caspian Sea to the west offers little trade potential at the moment, due in large part to its unclear legal status.

As Vatanka noted, this meant that the only routes open to Central Asia up to now have been “to the north, the giant Russia, and to the east another giant, China.”

The Central Asians have wanted “to break that geopolitical grip [of China and Russia],” but with the southern route closed off there were no other options. Now, Vatanka said, “You see from Astana to Ashgabat an interest in reconsidering what Iran can do for them geopolitically to lessen their reliance on countries like Russia and China.”

A trade route through Iran, westward toward Europe or south to the Persian Gulf States, changes the dynamics of trade for Central Asia and would also give the five countries a bit more leverage at the bargaining table with their “giant” neighbors.

And the most dramatic change in trade is likely to be in energy politics.

Iran not only has huge oil and gas reserves, it also offers the shortest non-Russian route for shipping Central Asian gas and oil to Europe. President Hassan Rohani mentioned this fact during his visit to Turkmenistan last month and the National Iranian Gas Company (NIGC) publicly offered at the start of February to transfer Azerbaijani and Turkmen gas to Europe through Turkey.

The European Union has been anxious to diversify its gas suppliers so it can decrease its dependence on Russian gas. The EU Southern Gas Corridor projects include receiving supplies of Azerbaijani and Turkmen gas, and possibly also gas from Kazakhstan and Uzbekistan, via this route.

The EU has been speaking with Azerbaijan and Turkmenistan for months about finally building a Trans-Caspian pipeline (TCP) to bring Turkmen gas across the Caspian Sea to Azerbaijan and on to Europe. The EU’s chief negotiator for the Southern Gas Corridor, Maros Sefcovic, is due to go to Turkmenistan in the coming weeks to discuss the construction of the TCP.

Iran would be an easier and cheaper route and the construction of the Trans-Anatolian Pipeline (TANAP) stretching across Turkey just started in mid-March. TANAP will eventually have the capacity to ship some 60 billion cubic meters of gas per year and will ultimately need more than Azerbaijani gas to fill it.

However, some of the panelists mentioned that it would be a minimum of five years and probably closer to a decade before any energy export projects through Iran were operational.

There were other concerns mentioned, such as the Turkish-Iranian rivalry in the region, which could one day threaten these southern routes to Europe.

However, Turkish President Recep Tayyip Erdogan was due to visit Iran on April 7, and the transportation of gas was reportedly high on his agenda.

One of the other factors to be considered is Russia’s reaction to Iran not only entering the gas market, but acting as a transit country for gas from the Caspian Basin region.  Russia is the obvious loser in such a scenario, as Iran, Azerbaijan, and Central Asian countries would be replacing Russian gas to Europe with their own gas, which is precisely the thinking that lies behind the Southern Gas Corridor project.

Another issue was the influence Iran might have on Central Asia if sanctions were lifted. Vatanka and Aryan agreed that the days when Iran might have dreamed of exporting its Islamic Revolution into Central Asia are long gone. There never was much hope for majority Shi’ite Iran to lure majority Sunni Central Asia into Tehran’s sphere of influence, but there were such concerns and some Iranian movement in that direction in the early 1990s, right after the Central Asian states became independent.

Vatanka pointed out that Iran seems to have respected Russia’s claim of influence in Central Asia and for that reason “If you look at what Iran does today in Iraq, Lebanon, Syria, in Bahrain or Yemen, you cannot compare the investment the Iranians have made in the Arab world to what they’ve done in Central Asia.”

Aryan said the only influence Iran could have, or would even be interested in with respect to Central Asia, would be economic.

The Central Asian states do have one small advantage in building relations with a post-sanctions Iran. They already have ties with Tehran, albeit to varying degrees.

A gas pipeline was built in the late 1990s connecting Iran to Turkmenistan (and another more recently) and Tehran has oil-swap arrangements with fellow Caspian littoral states Kazakhstan and Turkmenistan. The Kazakhstan-Turkmenistan-Iran railway was just inaugurated at the end of last year. Iranian companies have also invested in projects in Tajikistan, notably the Sangtuda-2 hydropower plant.

That said, many of the top officials in the Central Asian governments were once members of the Communist Party during the Soviet era and still harbor deep suspicions about theocracies.

So the road from Central Asia to Europe through Iran is not likely to open easily.