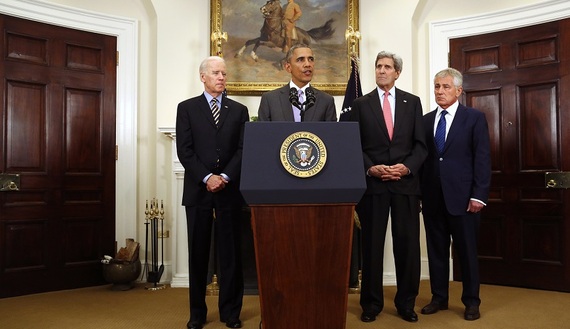 Political battle ramps up over Iran

WASHINGTON—President Barack Obama’s bet on a diplomatic agreement to deter Iran from acquiring a nuclear weapon faces an immediate test at home, where he must overcome the politics of skeptical Republicans as well as some Democrats in Congress.

The political struggle—part of the most complex battle of Mr. Obama’s presidency—is already under way as the GOP-controlled Congress aggressively presses for a bigger role in reviewing the nuclear-framework agreement reached last week between Iran, the U.S. and five other nations.

Mr. Obama also must navigate the complicated leadership factions in the Middle East against the backdrop of the region’s increasing volatility. And he has to do all this amid a hotly contested presidential contest.

“The stakes are huge,” said Robert Einhorn, formerly one of the Obama administration’s top officials in negotiations with Iran. “It’s a major component not just of his foreign policy, but of his presidency. And it’s a major battle.”

Senate Foreign Relations Committee Chairman Bob Corker (R., Tenn.) said Sunday that Congress should play a larger role in reviewing any final nuclear pact with Iran, which negotiators aim to complete by the end of June. “It’s very important that Congress is in the middle of this,” Mr. Corker said on Fox.

Senate Republican leaders are planning an April 14 vote on legislation by Mr. Corker that would prevent the Obama administration from lifting sanctions on Iran for 60 days. The delay would allow Congress to review and potentially vote on a final Iran agreement, which envisions removing sanctions. The White House has threatened to veto the bill in its current form, saying it could derail negotiations.

“I think Congress will require any deal negotiated with the Iranians to come to the Congress for our review before we lift congressional sanctions,” said Sen. Lindsey Graham (R., S.C.) on CBS, while adding that he supports giving negotiators time to put a final deal together by the June 30 deadline.

Mr. Corker said Sunday his legislation is close to having the 67 votes needed to override a presidential veto. Acknowledging the strength of bipartisan support for Mr. Corker’s bill, administration officials recently said Mr. Obama is open to compromise legislation that gives lawmakers more limited oversight of a deal.

“My hope is that we can find something that allows Congress to express itself but does not encroach on traditional presidential prerogatives—and ensures that, if in fact we get a good deal, that we can go ahead and implement it,” Mr. Obama said in an interview with New York Times columnist Thomas Friedman on Sunday.

The White House has significantly intensified its outreach to lawmakers, in particular Mr. Corker, who said he has spoken to Energy Secretary Ernest Moniz three times since the framework was announced. Top administration officials plan briefings for lawmakers on the framework. Mr. Moniz, one of the pact’s negotiators, said Sunday on CBS that under the agreement the U.S. will “have blocked all of these pathways to a bomb.”

“The real concerns in the region” are “that this will spark a nuclear arms race among the Sunni countries in the Middle East,” he said Sunday on ABC. “That’s a global danger.”

The framework, while more detailed than many observers had expected, leaves open some key questions, including the timing of sanctions relief for Iran, restrictions on Tehran’s nuclear research and development, and dealing with the military dimensions of its past nuclear work.

Mr. Netanyahu’s criticism drew a sharp rebuke from Sen. Dianne Feinstein, the senior Democrat on the Senate Select Committee on Intelligence, who said he should tamp down his campaign to scuttle an Iran deal. “I wish he would contain himself,” the California senator said on CNN. “I don’t think it’s helpful.”

Mr. Netanyahu’s decision last month to deliver a speech to Congress at the invitation of Republican leaders and without signoff from the Obama administration—a talk in which he excoriated any Iran deal—has made relations with the White House toxic and angered some Democrats.

While Mr. Obama has confronted high-stakes challenges since taking office, including the U.S. economic crash, budget brinkmanship and a fight over his health-insurance law, he hasn’t faced the sort of global test diplomatic outreach to Iran presents.

In many ways no president has, experts say, given the confluence of potentially destabilizing factors at home and abroad and the global impact of the success or failure of the White House’s strategy.

“This is not just business as usual. This is something that’s broader and deeper in terms of the intensity of the disagreement in Washington and around the country,” said Richard Haass, president of the Council on Foreign Relations and a former George W. Bush administration official. It is unfolding, he said, “at a moment when the Middle East is unraveling.”

The deal also risks fueling unrest in the Middle East. U.S. allies in the region, particularly Israel and Saudi Arabia, are concerned a final deal would empower Iran.

Mr. Obama’s pursuit of the pact has strained traditional American alliances in the region. He had a lengthy phone conversation with Mr. Netanyahu after the deal was announced Thursday, a senior administration official said, and plans to convene a meeting this spring with leaders of Gulf nations at Camp David, the presidential retreat in Maryland.

A number of senior Arab officials have warned the White House in recent months the Saudi government could seek Pakistan’s aid in developing nuclear technologies.

Mr. Obama has outlined the stakes in stark terms, saying failure of his diplomatic pursuit could plunge the U.S. into another Middle East war.

Critics of the Iran deal dispute that contention. “I believe there is a better deal. I don’t want a war,” Mr. Graham said.

Mr. Obama’s drive toward a final agreement with Iran is poised to overshadow the remainder of his time in office. Even if negotiators can complete a final agreement by the end of June, the implementation of its terms will drag well into 2016 and is likely to remain a key focus after Mr. Obama’s successor takes over in January 2017.

The president’s decision to spend the bulk of his second-term political capital on a dialogue between two nations that have been estranged for more than three decades underscores how personally important a nuclear pact is to him.

“Over the course of his presidency, other than the war in Afghanistan and terrorism, Iran is an issue that he’s spent more time on than any other issue,” a senior administration official said after the framework agreement was announced. “The first negotiation that he had on this started in 2009.”