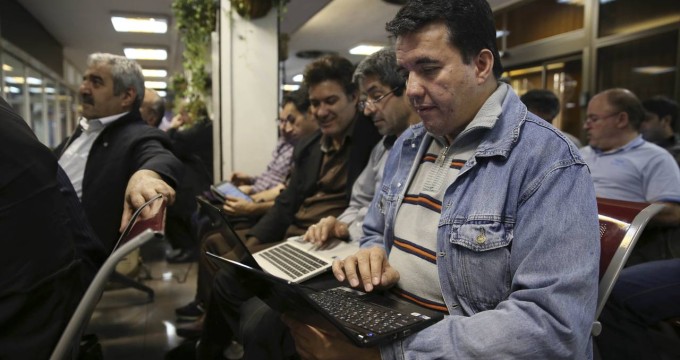 Iran’s hard-hit private businesses are looking to the prospect of easing sanctions with hope that it will help gradually loosen the grip of hard-line clerics and the Revolutionary Guard force on the country’s economy.

Saeed Laylaz, an Iranian economist and political reformer in Iran, said the lifting of sanctions related to Iran’s nuclear program could open up the economy and undercut the advantages held by well-connected hard-liners. Private businessmen frequently complain that they were disproportionately hurt by sanctions while being the most critical of hard-liners in the regime.

“Sanctions are helping the very right wing,” said Mr. Laylaz. “We have a new social class because of the sanctions. They’re small in numbers but they have a lot of power because of the money they have earned.”

Sanctions benefited businesses connected to political power because they had better access to the limited avenues of foreign trade that remained open, said Djavad Salehi-Isfahani, a professor of economics at Virginia Tech University and former Iranian central bank official. While the private sector took a beating, those able to access scarce foreign currency or evade the restrictions with impunity fared better under the restrictions.

“Removal of sanctions democratizes access to global markets,” he said.

Dr. Hossein Abdoh Tabrizi, a senior adviser to the Ministry of Transportation and Housing in the current administration, said the central bank should inject billions of dollars freed by the end of sanctions into Iran’s private sector, which has been hard hit by years of isolation.

The ruling clerics touted last week’s agreement with six world powers as a triumph of their leadership, though details and implementation of a final nuclear deal still have to be worked out before a June 30 deadline.

The framework agreement outlines the lifting of economic sanctions over time in exchange for limits meant to prevent Iran from developing nuclear weapons. Among the first sanctions to go would likely be restrictions on purchases of Iranian oil and bans on financial transactions with many Iranian banks.

Iran’s economy would get an immediate jolt as tens of billions of dollars frozen in foreign accounts flow home and the country is able once again to sell its main cash export around the world.

That would bolster the immediate political fortunes of President Rouhani, who has made improving economy through a nuclear deal the cornerstone of his administration since being elected in 2013. He has struggled not only with falling oil exports because of sanctions, but also with the precipitous drop in oil prices over the past nine months. The combination has ravaged the government’s budget and the economy.

Mr. Rouhani, a pragmatic regime veteran, won the presidency by riding a wave of popular anger over Mr. Ahmadinejad’s mismanagement of the economy. He has challenged hard-line legislators in parliament and criticized the economic power of the Revolutionary Guards. Easing sanctions could dramatically strengthen the efforts of President Rouhani and his allies to loosen the grip of Iran’s most politically connected hard-liners on the economy, some economists and businessmen say.

The hopes of reformers and economic liberals to gain influence is something that is by no means guaranteed. Their ambitions were largely eviscerated during Mr. Ahmadinejad’s tenure, when mass demonstrations against the regime were crushed after his re-election in 2009.

Leading reform candidates have been under house arrest for years, among them Mir Hossein Mousavi who ran against Mr. Ahmadinejad in 2009 and challenged the election results.

Mr. Rouhani is a longtime fixture of the ruling clique that has dominated the Islamic Republic since the revolution in 1979. However, that camp isn’t monolithic.

Within it are pragmatists such as the president who favor a more internationalized economy and greater personal freedoms short of political dissent or criticism of the government. They are now, for example, pressing to allow women to attend public volleyball and soccer matches. Though he has fought hard for a nuclear deal and to get sanctions relief, the president has show little inclination so far to push for highly controversial political reforms such as the release political prisoners. He has also shown little interest in trying to temper Iran’s controversial open push for expanded political influence across the Middle East from Syria to Yemen.

Private businessmen say they expect many of the politically connected elites who have been decrying the West and profiting from trade with China, Venezuela and Africa to remake themselves as middlemen for Western firms trying to gain access to Iran.

“Tomorrow, those same people will be the first ones to line up to do business with U.S. companies,” said one Iranian businessman.

The Revolutionary Guard’s tentacles in the oil industry may keep Western companies at bay, even if sanctions are lifted, one Western oil official looking at Iran opportunities said Sunday. The U.S. will continue applying human-rights sanctions, he said.

And as one Iranian oil official described the Revolutionary Guard’s grip: “They are here to stay.”

The tension between those who see the lifting of sanctions as benefiting the regime and those who believe it could weaken it over time is echoed in Washington.

The Obama administration is partly betting that when the nuclear deal expires in 10 to 15 years Iran’s leadership will have changed or at least moderated. Congressional hawks meanwhile argue the hard-liners will be able to take advantage of the economic boost to bolster their own standing at home and pursue policies abroad more aggressively.

Still, Mr. Rouhani has already begun carefully nudging aside some of the companies controlled by the Revolutionary Guard where they have failed to perform, especially in the all-important oil sector.