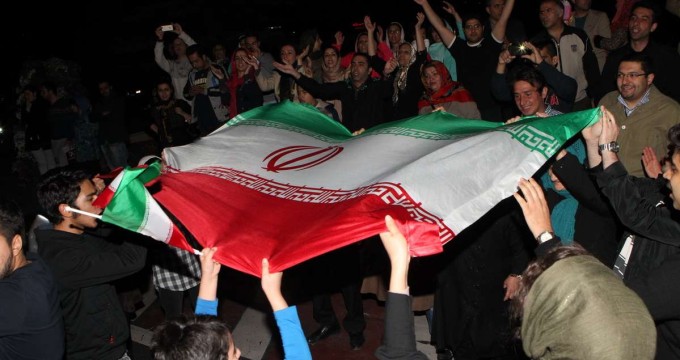 TEHRAN, Iran (AP) — As Iran’s nuclear negotiators returned home with the framework of a deal with world powers, joyous revelers joked that “still, there is no whiskey” in the Islamic Republic, a jab at its theocratic government. But hard-liners here aren’t laughing.

Hard-liners face a crisis as Iran looks to reach a permanent deal with world powers over its contested nuclear program, long a point of nationalistic pride. The nuclear deal, which they view as a disastrous capitulation to an implacably hostile West, is being welcomed as a turning point and the start of a new era by moderates, who yearn for greater openness.

This is “the first big step in 36 years toward detente with the West,” prominent analyst Sadeq Zibakalam said. “This is a turning point, one of the reasons why hard-liners are depressed.”

Iran’s top leader Ayatollah Ali Khamenei, who has the final say on all major issues, including the nuclear program, has backed the negotiators, further stepping up the pressure on hard-liners.

But opponents of any deal hold important sway over the pace and direction of Iran’s nuclear program through the country’s Revolutionary Guard, the single most powerful institution in Iran. It’s still unclear whether the Guard, which exerts a strong behind-the-scenes role in Iranian affairs, would agree to potential demands such as increased international monitoring at nuclear and related sites. That could further complicate efforts to translate last week’s framework into a final agreement by June 30.

Already, hard-liners have complained that Iranian state television, which for the first time aired a speech by U.S. President Barack Obama live last week, has not allowed them to criticize the deal on air, forcing them to confine their views to conservative websites and newspapers.

Hard-line lawmaker Mahdi Kouchakzadeh took the fight to parliament Sunday, holding up a placard reading: “Any contract that brings foreign domination … is forbidden.”

Anti-American sentiment in Iran goes back to at least the 1950s, when the U.S. helped depose an elected leader and re-install the monarchy of the Western-backed shah. But the country has long been divided between those determined to maintain the fervor of the 1979 Islamic revolution and reformers who want to ease restrictions inside Iran and soften its foreign policy.

Reliable opinion polls are hard to come by in Iran; the government regularly conducts its own opinion polls but the results are rarely made public.

The government cracked down on reformers following Ahmadinejad’s disputed 2009 re-election, but since then moderates have staged something of a comeback through the election of President Hassan Rouhani. The framework agreement, which prompted joyous street celebrations and has sent stocks soaring by 6.9 percent over the past two days alone, could further boost their fortunes.

Should Iran reach a final nuclear accord with world powers that loosens sanctions, the economic opening could give moderates a major boost ahead of crucial parliamentary elections next February.

For now though, the framework deal struck in Switzerland has brought cautious optimism, and a series of jokes traded by text message.

“I went to the shop today and they still don’t have whiskey! What sort of a deal is this?” one joke goes.

Another offers advice, considering the deal remains preliminary at best: “This is a deal restricted to the nuclear program, don’t walk in the street in shorts!”