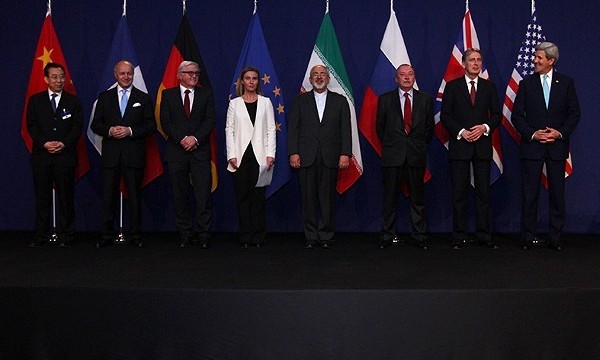 TEHRAN (FNA)- Iraq, Lebanon, Pakistan and Jordan underlined that the nuclear understanding achieved by Iran and the Group 5+1 (the five permanent UN Security Council members plus Germany) in Lausanne is of paramount importance for the reinvigoration of regional peace and security.

The Iraqi president’s office, the Lebanese parliament, the Jordanian government and the Pakistani foreign ministry, in separate messages, voiced satisfaction in the progressive trend of nuclear talks between Iran and the Sextet of world powers, and expressed the hope that the Lausanne understanding would pave the ground for cutting of a final deal.

They termed the Lausanne statement as a constructive more towards consolidation of security in the Middle East as well as entire world.

On Friday, Iran’s President Hassan Rouhani underlined that all the UN and economic, financial and banking sanctions against Iran will be annulled the moment a final nuclear deal between Iran and the six world powers goes into effect.

In a public address on the state-run TV, President Rouhani reminded his election campaign slogan that he would keep Iran’s nuclear industry running and remove the sanctions against the country, and said the Iranian nation is now closer to this goal more than ever.

He said his administration had a four-step plan, which included the attainment of an interim deal, “and after months of efforts, specially during the last few days, the second objective was also materialized last night”.

“In this second step, we have both maintenance of nuclear rights and removal of sanctions alongside constructive interaction with the world,” the president continued.

He further described attainment of a final deal as a third step before the July 1 deadline to be followed by a fourth step which would be its implementation.

“The Group 5+1 (the US, Britain, France, Russia and China plus Germany) has accepted in the framework understanding attained on Thursday night that Iran will have domestic enrichment on its soil; and this means that those who stated that Iran’s enrichment is a threat to the region and the world have admitted today that enrichment in Iran is no threat to anyone,” said President Rouhani.

“I, hereby, declare in a straightforward manner now that enrichment and all nuclear-related technologies are only aimed at Iran’s development and will not be used against any other countries and the world has acknowledged very well today that Iran is seeking peaceful purposes,” he added.

He said Arak Heavy Water Reactor will continue its operation with the help of the most modern technologies and “Fordo (uranium enrichment plant) will remain operational forever with 1,000 centrifuges installed in there and nuclear and physics-related activities and technologies will run there”.

“On the basis of this framework, all sanctions in financial, economic and banking sectors as well as all (UN Security Council) sanctions resolutions against Iran will be canceled on the very first day of the implementation of the deal, and new cooperation in both nuclear and other sectors will start with the world on the same day,” the Iranian President reiterated.

Rouhani said his administration proved that sanctions, threats and pressures have failed to produce results, reiterating that Iran has always offered the West to resolve problems through talks.

Rejecting the western statements that Tehran joined the nuclear negotiations only under tough sanctions, President Rouhani underscored that Iran would never surrender to the powers and their bullying, but it would respect anyone who would treat it with honor and respect.

The Iranian president further reiterated that his nation is ready for cooperation with the world countries based on mutual respect and shared interests.

Iran and G5+1 started their new round of talks in Lausanne, Switzerland, last week to narrow their differences over Tehran’s nuclear energy program ahead of a July 1 deadline.

Iranian Foreign Minister Mohammad Javad Zarif said according to the agreement reached between Iran and the six world powers, all the US, EU and UN Security Council sanctions against Iran will be lifted under the final deal.

“Our decision today that will be the agreed base for the final text of the Joint Plan of Action (the final deal) is of vital importance,” Zarif said reading out a joint statement at a press conference with EU foreign policy chief Federica Mogherini in Lausanne, Switzerland, on Thursday.

“Now we can start drafting the final agreement and its annexations by relying on the solutions achieved in the last few days,” he said after eight days of marathon talks with negotiators from the six world powers.

“As Iran continues its peaceful nuclear program, the degree and capacity of its enrichment and the size of its (enriched uranium) stockpile will be limited for specific periods and Natanz will be the only enrichment center in Iran. Nuclear enrichment R&D on centrifuge machines in Iran will be conducted on the basis of an agreed timeline and level.”

Zarif said Fordo will turn from a nuclear enrichment plant to a nuclear, physics and technological center, where Iran will receive international cooperation.

He said “there won’t be any reprocessing at the Arak facility and its consumed nuclear fuel will be sent” abroad.

“A collection of arrangements have been agreed for supervising the implementation of the contents of the Joint Plan of Action (final deal) which will include Safeguard Code 3.1 and voluntary implementation of the Additional Protocol (to the NPT); the International Atomic Energy Agency (IAEA) will also use modern inspection technologies and will be given more agreed access to verify past and present issues,” Zarif said.

He said Iran will partner in international nuclear projects, “including power plant and research reactor construction as well as nuclear safety and security”.

Zarif stressed that all sanctions against Iran will be lifted.

He said all UN Security Council sanctions resolution against Iran will be annulled as they did not help the settlement of the nuclear standoff between Iran and the six world powers.

“The EU will terminate imposition of its nuclear-related economic and financial sanctions and the United States will also stop implementation of its nuclear-related financial and economic sanctions simultaneous with the implementation of Iran’s major nuclear undertakings in a way that they are verified by the IAEA,” Zarif said.

Zarif said the final deal will be endorsed by a UN Security Council resolution in a move to annul all the previous nuclear-related resolutions against Iran.

In a subsequent solo press conference, Zarif warned that Tehran will reciprocate any violation of the final nuclear deal by the six world powers with similar action.

Zarif told reporters that the agreements and the shared understanding developed in the last eight days of talks will be the basis for working out a final nuclear deal after the inclusion of details and mechanisms for implementing them.

Zarif reiterated that a final deal should be worked out in the next three months.

He said Iran is committed to the documents that it signs and expects the six world powers to do the same.

Zarif said work will continue by the seven nations “to proceed based on their present shared understanding”, adding that the seven nations should look ahead with optimism “and if any problem arises, we should sit and talk based on mutual respect, and then move ahead”.

Asked about Iran’s possible reaction if the opposite side defies its undertakings under the pretext of having a different interpretation of the solutions gained, he said that the seven nations party to the nuclear talks might present today’s agreement in different ways as they see fit.

“What was agreed as different solutions to achieve a comprehensive joint plan of action is based on a win-win approach that will end the sanctions against Iran.”

“Iran’s nuclear program will continue, but we will adopt measures to build confidence at international level,” he added.

He said Iran will inspect the opposite sides’ actions and attitude precisely to verify their compliance with the terms of the final deal, once the document is drafted and put into effect.

“There will be a text on which we will agree and move ahead step by step and all the mechanisms should go into effect article by article. We will be ready to remove any pretext or excuse that could be sought by the western side through logic and reasoning.”

“But if lack of action is witnessed, reciprocal measures will be taken,” the Iranian foreign minister warned.

He repeated that all the US, EU and UN Security Council sanctions against Iran will be removed.

He appreciated the Iranian Supreme Leader for his support throughout the talks as well as Head of the Atomic Energy Organization of Iran Ali Akbar Salehi for his technical contribution to the negotiations.