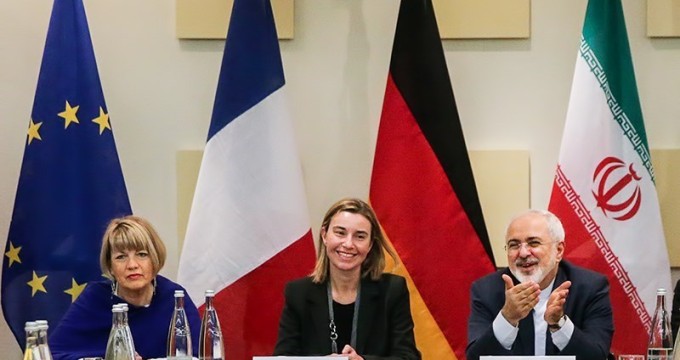 LAUSANNE, Switzerland — Negotiators appeared to be moving wearily on Thursday toward a preliminary accord on limiting Iran’s nuclear program, but they remained at odds about how specific that agreement would be.

Mohammad Javad Zarif, Iran’s foreign minister, suggested the accord would take the form of a general statement that he would issue publicly with Federica Mogherini, the European Union’s foreign policy chief.

“There will be a statement to the press, which should be announced, but the text still has to be worked on,” Mr. Zarif said, according to the Iranian news agency Mehr.

But the Obama administration has insisted that the current round of talks here in the Swiss city of Lausanne produce an understanding with a “quantitative dimension” — that is, specific limits on Iran’s nuclear program that the White House can cite to push back against congressional moves for additional sanctions.

It remained to be seen whether the document issued at the end of this negotiating session, if it is made public later on Thursday as expected, would mention such limits or what precise form it might take.

If no details are enumerated in a joint statement with Iran, there could be other ways to convey them, including public remarks by Western officials or briefings to Congress, Western diplomats have suggested in recent weeks. But including them in a document that Iran has endorsed would give the details Tehran’s explicit imprimatur.

President Obama had set March 31 as a deadline for reaching a political accord to define the main terms of a final, comprehensive agreement due by the end of June.

The Obama administration has extended that self-imposed deadline. But at the same time the White House has warned publicly that it is prepared to step back from the diplomacy if it is clear that the initial accord cannot be reached.

An all-night round of talks ended at 6 a.m. on Thursday. Mr. Zarif noted that some diplomats had not slept at all, and fatigue was visible on the faces of some aides who straggled into the breakfast room of the luxury hotel here where the talks are being held under tight security.

Shortly before 11 a.m., the deliberations resumed as Mr. Kerry met with Ms. Mogherini and the chief diplomats of Britain, France and Germany. Russia and China, whose foreign minsters have left the talks, were represented by lower-ranking officials.

Mr. Zarif said the purpose of the meeting would be to assess the “solutions” that Iran had discussed with the Americans and their negotiating partners overnight.

The form of any understanding with Iranhas been at issue for weeks.

But there have been other complicated questions, including how quickly sanctions on Iran might be eased and what nuclear research would be permitted on advanced centrifuges.

An idea to temporarily suspend certain United Nations sanctions but to arrange for them to automatically “snap back” into place if Iran does not fulfill its commitments under a nuclear accord has also prompted concerns from Russia that such a procedure might dilute the authority of its Security Council veto power.

For weeks, some critics have complained that the March 31 deadline the Obama administration had set for a preliminary accord might diminish its leverage in the talks by adding to the pressure on American negotiators to make last-minute concessions.

Last month, Gérard Araud, France’s ambassador to the United States, warned that it was foolish to insist on a firm March 31 deadline.

“Repeating that an agreement has to be reached by the end of March is a bad tactic,” Mr. Araud wrote last month on Twitter, underlining differences between Paris and Washington.

American lawmakers do not return from their recess until mid-April, and winning the debate with Congress will depend more on what concrete agreements are reached here than on whether the talks drag on for a few days or even weeks.

Still, even as the United States extended the negotiating deadline, there was every sign that a push was being made to come up with some sort of political accord this week.

“We are a few meters from the finishing line, but it’s always the last meters that are the most difficult,” Mr. Fabius said after his arrival. “We will try and cross them.”

In Washington, some Republican lawmakers saw the extension as a sign that the effort to secure tight limits on Iran’s nuclear program may falter.

“It is clear, the negotiations are not going well,” Senator John McCain and Senator Lindsey Graham said in a statement. “At every step, the Iranians appear intent on retaining the capacity to achieve a nuclear weapon.”

Ali Akbar Salehi, the head of the Iranian Atomic Energy Organization, expressed optimism that an accord would be reached.

“We are approaching sunrise,” he told the news agency Tasnim. “We have made good improvements.”