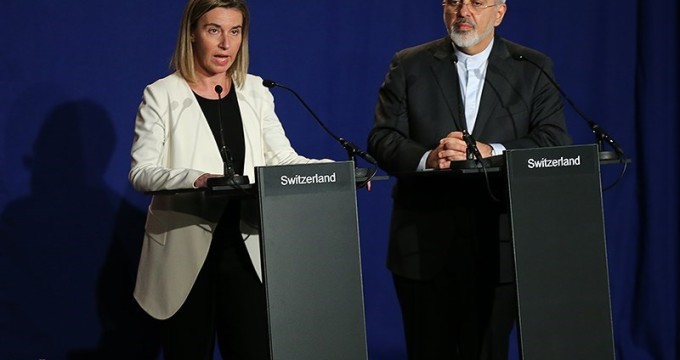 Iran’s Zarif: Sanctions against Iran will be removed

TEHRAN (FNA)- Iranian Foreign Minister Mohammad Javad Zarif said according to an agreement reached between Iran and the six world powers, all the US, EU and UN Security Council sanctions against Iran will be lifted under the final deal.

“Our decision today will be the agreed base for the final text of the Joint the Plan of Action (the final deal) is of vital importance,” Zarif told a joint press conference with EU foreign policy chief Federica Mogherini in Lausanne, Switzerland, on Thursday after eight days of marathon talks.

“Now we can start drafting the final agreement and its annexations by relying on the solutions achieved in the last few days,” he said.

“As Iran continues its peaceful nuclear program, the degree and capacity of its enrichment and the size of its (enriched uranium) stockpile will be limited for specific periods and Natanz will be the only enrichment center in Iran. Nuclear enrichment R&D on centrifuge machines in Iran will be conducted on the basis of an agreed timeline and level.”

Zarif said Fordo will turn from a nuclear enrichment plant to a nuclear, physics and technological center, where Iran will received international cooperation.

He said “there won’t be any reprocessing at the Arak facility and its consumed nuclear fuel will be exported”.

“A collection of arrangements have been agreed for the supervision over the implementation of the contents of the Joint Plan of Action (final deal) which include 3.1 Safeguard Agreement code and the voluntary implementation of the additional protocol (to the NPT); the International Atomic Energy Agency (IAEA) will also use modern inspection technologies and will be given more agreed access to verify past and present issues,” Zarif said.

He said Iran will partner in international nuclear projects, “including power plant and research reactor construction as well as nuclear safety and security”.

Zarif said all sanctions against Iran will be lifted.

All UN Security Council sanctions resolution against Iran will be annulled as they did not help the settlement of the nuclear standoff between Iran and the six world powers.

“The EU will terminate imposition of its nuclear-related economic and financial sanctions and the United States will also stop implementation of its nuclear-related financial and economic sanctions simultaneous with the implementation of Iran’s major nuclear undertakings in a way that they are verified by the IAEA,” Zarif said.

Zarif said the final deal will be endorsed by a UN Security Council sanctions in a move to annul all the previous nuclear-related resolutions against Iran.

In a subsequent solo press conference, Zarif underlined that Iran’s nuclear R&D will continue and none of Iran’s nuclear facilities will be shut down.

He repeated that all the US, EU and UN security council sanctions against will be removed.

He cautioned that the seven nations party to the nuclear talks might present today’s agreement in different ways as they see fit.

Zarif reiterated that a final deal should be worked out in the next three months.

He appreciated the Iranian Supreme Leader for his support throughout the talks as well as the head of the Atomic Energy Organization of Iran Ali Akbar Salehi for his technical contribution to the negotiations.

Iran and Group 5+1 (the five permanent UN Security Council members plus Germany) started their new round of talks in Lausanne, Switzerland, last Thursday to narrow their differences over Tehran’s nuclear energy program ahead of a July 1 deadline.