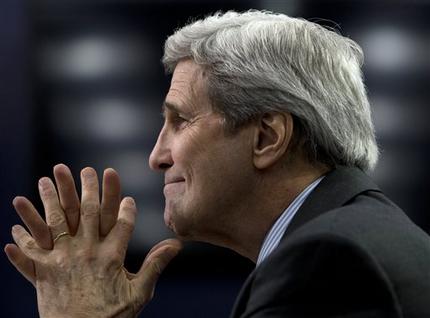 Hopefully, the negotiating sides can reach an agreement on Tehran’s nuclear industry by Wednesday evening.

LAUSANNE (Sputnik) — US Secretary of State John Kerry said on Wednesday he hopes the P5+1 group of international negotiators and Iran will reach a deal on Tehran’s disputed nuclear development program by evening.”We are hoping,” Kerry told journalists in the Swiss city of Lausanne, where negotiations between six world powers and Iran have been underway ahead of Wednesday’s framework agreement deadline.

Earlier in the day, German Chancellor Angela Merkel said that most steps toward an agreement between world powers and Iran have been made.

kThe P5+1 countries — Russia, the United States, the United Kingdom, France, China and Germany — have been negotiating with Iran to halt its uranium enrichment program, fearing Tehran is developing nuclear weapons under the guise of a civilian energy program.Tuesday was the deadline for the negotiators to hammer out an agreement but the talks continued into the night and resumed on Wednesday.

A joint statement on the progress of the negotiations is expected to be made later on Wednesday, according to Iranian Deputy Foreign Minister Abbas Araqchi.