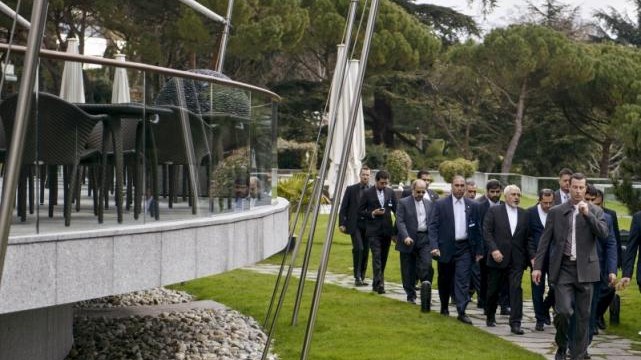 As nuclear talks drag on, U.S. and Iran find it harder to hear each other

LAUSANNE, Switzerland — As the nuclear negotiations dragged into overtime here on Tuesday, some uniquely American and Iranian political sensitivities were permeating the marathon negotiating sessions, leading many to wonder whether two countries that have barely spoken for 35 years are just not ready to overcome old suspicions.

In the hallway chatter overheard in the century-old Beau-Rivage Palace Hotel here, where Secretary of State John Kerry and his counterparts from five other countries are struggling to close a preliminary political deal withIran, the Americans talk, in a wonderfully American way, about numbers and limits.

Yet, when Iranian officials step out of the elegant, chandeliered rooms, where the post-World War I order was negotiated 90 years ago, to brief the news media — primarily their own — most questions about numbers and limits are waved away. Those officials talk almost entirely about preserving respect for their rights and Iran’s sense of sovereignty.

To participants in the negotiating rooms — where the talks dragged past the midnight March 31 deadline with a rare, public threat by the White House spokesman, Josh Earnest, to walk away if Iran did not make some fundamental political decisions — the differences are beginning to threaten the viability of the whole enterprise. Iranian negotiators, highly attuned to the politics back home, are reluctant to sign any piece of paper that lays out too many specifics about what they would give up or put in storage, or how much nuclear fuel they would either hand over to the Russians or dilute.

“We are all about quantifiables: how many centrifuges can spin, how much plutonium can come out of the Arak reactor, how much uranium you can have on hand,” one senior American official at the center of the negotiations said the other day on the condition of anonymity because of the secrecy the United States is trying to enforce around the talks.

“They are all about symbolism, about avoiding the optics of backing down,” the official said, even if it means engaging in expensive, inefficient nuclear enrichment activity that makes little economic or strategic sense.

There is a sense that the hurdles would be lower if the negotiations were limited to Mr. Kerry, Energy Secretary Ernest J. Moniz and their Iranian counterparts. By all accounts, their working relationship is strong; Mr. Kerry has now spent more time with Iran’s jovial, American-educated foreign minister, Mohammad Javad Zarif, than with any other foreign minister.

Mr. Moniz talks enrichment and reactor technology with the head of Iran’s atomic energy agency, Ali Akbar Salehi; while they have disagreements, they are almost all about technology, not ideology. Both Iranians were trained in the United States before the 1979 revolution, and while they cannot say so, both clearly appear to see this nuclear negotiation as a way to end the days of Iran’s defining itself by its opposition to the United States.

But their hands often seem tied. As much as the American team would like to treat the negotiations as a way to contain a dangerous proliferation threat, they have to deal with a Congress that sees them as a proxy for containing Iran as it flexes its muscles in the Middle East, from Iraq to Yemen to Syria.

For the Iranians, the negotiations are a first test of whether the United States, still sometimes called the Great Satan, can learn to accommodate Iran’s re-emergence as a Persian power.

At various moments, Iran’s supreme leader, Ayatollah Ali Khamenei, has surprised his own negotiating team by laying down lines they cannot cross: Iran must ultimately be able to produce nuclear fuel on an industrial scale, with 10 times the output it has today, and it must not close nuclear facilities, which explains the focus on how to “repurpose” the giant underground enrichment site at Fordow into some kind of “R & D facility” that would not process uranium.

The other day, Mr. Zarif’s deputy declared anew that Iran would not ship any of its stockpile of fuel out of the country to Russia, which seemed like a common-sense solution for getting it out of the country without forcing Iran to give up ownership. Many had assumed — wrongly, it seems — that this was a done deal. Instead, the State Department spokeswoman had to concede that even this late in the game, “the bottom line is that we don’t have agreement with the Iranians on the stockpile issue.”

It is, said Karim Sadjadpour, an Iran scholar at the Carnegie Endowment for International Peace, an occupational hazard in negotiating with a country that has such divided power centers.

“A perennial challenge in dealing with Iran is that Iran’s most powerful officials are inaccessible, while Iran’s most accessible officials aren’t powerful,” Mr. Sadjadpour said on Tuesday. “Ayatollah Khamenei hasn’t left the country since 1989. Qassim Suleimani hangs out in Tikrit, not Lausanne,” he noted, referring to the immensely powerful commander of the Quds Force, who has worked to retake Tikrit, Iraq, from the Islamic State.

It may be the first time that the United States has found itself on the same side of a conflict as General Suleimani, and that is not an easy place to be. He is on the United Nations sanctions list, partly for terrorist activities, and the Iranian Revolutionary Guard Corps, of which the Quds Force is an elite subset, is the guardian of the military side of the Iranian nuclear program.

The Iranians, meanwhile, have gotten a taste of American politics. Mr. Kerry needs shutdown and dismantlement numbers because Congress demands them. If he and Mr. Moniz cannot make a specific case about how to measure Iranian compliance with the deal, and how to calculate whether there is now “one-year breakout time to a bomb,” there is a reasonable argument that more sanctions will follow.

“To sell a nuclear agreement in Washington, Obama must make the case that it buys time in the face of an urgent threat and that it will support the process of internal reform within Iran,” Mr. Litwak said. “To sell a nuclear agreement to the hard-liners in Tehran, Zarif’s team must make the case that it recognizes Iran’s ‘rights,’ leaves Iran with a future hedge option for a weapon, and is not putting Iran on a slippery slope to be pressured by America for additional demands that would undermine the foundations of the revolutionary state.”

In fact, Mr. Obama and his aides make the case that Iran’s growing power in the Middle East is precisely why the nuclear accord is so important. Imagine containing Iran’s ambitions if its neighbors knew it had a nuclear weapon, or even — and far more likely — a threshold capability to manufacture one.

That is why Mr. Kerry has said a bottom-line objective of the talks is to assure that Iran could not make the fuel for a nuclear weapon in less than a year, creating enough warning time for diplomatic action, renewed sanctions or, if necessary, military action.

But the difficulty of putting together this accord should serve as a cautionary tale: Even if it comes together by June 30, the chances of remaking the relationship are small at best, at least anytime soon. As Haleh Esfandiari, an Iranian-American scholar at the Wilson Center, wrote recently, “Four decades of hostility between Iran and the United States will not be erased overnight.”