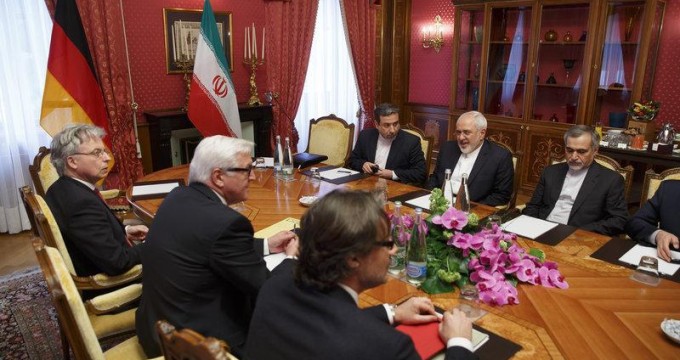 LAUSANNE, Switzerland — As deadline day dawned at the Iran nuclear talks Tuesday, diplomats scurried to find a way out of an impasse over sanctions and research so they can make a preliminary deal by their midnight deadline.

In a strong indication that an agreement may be imminent, Russian Foreign Sergei Lavrov announced in Moscow that he was flying back to Lausanne to take part in the last hours of talks. Lavrov left the talks Monday, saying he would return only when there was a “realistic” chance of a deal.

“Indeed I am planning to return and take part in the final part of the ministerial meeting of the six powers,” Lavrov told reporters in Moscow. “The prospects of this round of talks are not bad, even pretty good I would say.”

Secretary of State John F. Kerry, who spent Monday in a string of meetings that dragged on until close to midnight, began the day at 6 a.m. with a working breakfast with the U.S. negotiating team.

Even as the sun was just peeking above the Swiss alps at 7:30 a.m., the Iranians started meeting with diplomats from all six nations conducting the negotiations to restrain Iran’s nuclear future and ease international sanctions. As time was running out, the mood among negotiators was an uneasy mix of optimism and uncertainty. Even at the 11th hour, wide differences remain over the pace at which sanctions would be lifted, and what limits might be imposed on Iran in the final years of a 15-year accord.

“I’ve been telling the German media we’re in a bit of a crisis with the talks,” German Foreign Minister Frank-Walter Steinmeier told a BBC reporter at the breakfast buffet. “Perhaps we will have a bit of a new approach. We will see.”

The deadline of midnight in Switzerland, or 6 p.m. Eastern time, is self-imposed. When talks were extended in November, Kerry said that if they did not have a broad agreement by the end of March, President Obama would have to reassess whether to continue the talks.

Many members of Congress are inclined to expand sanctions against Iran if there is no progress, a move the White House says could end up pushing Iran to walk away from the table entirely and resume its nuclear program full tilt.

But several of the other countries negotiating alongside the United States do not feel such urgency, and point out the real deadline is June 30 when an interim agreement expires.

Many assessments were measured, with success and failure deemed equally plausible.

Kerry said Monday that difficult issues remain on the table.

“We are working very hard to work those through,” Kerry told a CNN reporter. “We are working late into the night and obviously into tomorrow. We are working with a view to get something done. There is a little more light there today, but there are still some tricky issues. Everyone knows the meaning of tomorrow.”

Marie Harf, a spokeswoman for the State Department, put the odds of an agreement at 50-50. “There’s a chance we will get it done,” she said.

Chinese Foreign Minister Wang Yi told reporters that he was “cautiously optimistic” and said that “positions are narrowing.”

As the deadline approached, the negotiators worked to settle some core issues: What kind of nuclear research would Iran be allowed to pursue in the final five years of a 15-year accord? When can the United Nations’ sanctions be eased? Will the sanctions be lifted or merely suspended so that they can be slapped back into place if Iran does not meet its commitments?

Abbas Araghchi, Iran’s deputy foreign minister, tweeted that because the talks were ongoing, negotiators had not started drafting a document that outlines agreed-upon principles that would guide further discussions on complex scientific details. A final agreement is to be worked out by the end of June.

The White House said that President Obama has been receiving regular updates from the negotiating team, which is led by Kerry and Energy Secretary Ernest Moniz, and it predicted that the talks would stretch into the final hours.

“I’m not going to presuppose failure,” White House spokesman Eric Schultz said. “Those negotiations are going to go down to the wire.”

“The agreement being formulated in Lausanne sends a message that there is no price for aggression and, on the contrary, that Iran’s aggression is to be rewarded,” he said.

“The moderate and responsible countries in the region, especially Israel and also many other countries, will be the first to be hurt by this agreement. One cannot understand that when forces supported by Iran continue to conquer more ground in Yemen, in Lausanne they are closing their eyes to this aggression.”

The Tuesday deadline is crucial for U.S. negotiators, because Obama and Kerry have said that

if a framework agreement is not reached by then, they will have to assess whether to continue the process. But an interim agreement, under which Iran has limited its nuclear output, does not expire until June 30. Negotiators from France, Germany, Britain, China and Russia have expressed less urgency about getting some sort of understanding outlined by midnight Tuesday.

An agreement, if there is one, could still be difficult to sell to a skeptical Congress — and many Americans.

“The very notion of America compromising with Iran is very difficult,” said Trita Parsi, president of the National Iranian American Council, who is in Lausanne and following the talks. “We’re dealing with what America thinks of as a Third World country, and the United States doesn’t have to compromise.

“But this is not about discussing Iran’s capitulation. It’s a negotiation.”

Parsi said that Araghchi may have been practicing some last-minute brinkmanship when he told Iranian reporters Sunday that Tehran would not send most of its stockpiles of enriched uranium to Russia.

Araghchi has made similar comments in recent months, and Tehran swiftly denied that any decision on stockpiles had been reached. A senior State Department official said that the fate of Iran’s stockpiles is still open for discussion.

“Iran has by and large accepted American demands,” Parsi said. “What it’s not accepting is what it’s getting in return. The United States has said it won’t lift sanctions upfront. But it may have to.”