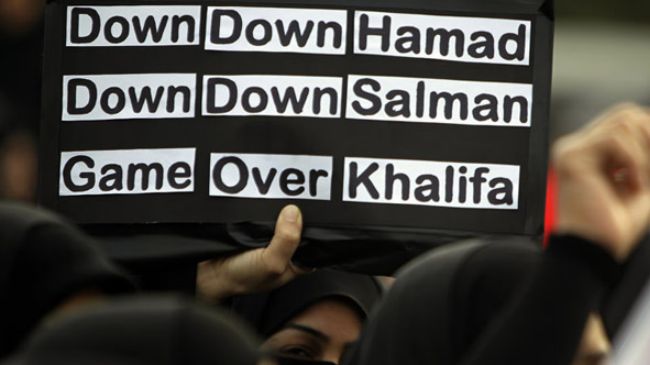 Bahraini protesters have once again poured into the streets in several parts of the Persian Gulf Kingdom in solidarity with political prisoners.

Chanting slogans against the Al Khalifah regime, the demonstrators on Monday took to the streets of several villages including al-Daih, Saar, Musalla and Bilad al-Qadeem.

The protesters called on the Manama regime to immediately release the detainees held at the Jaw prison as well as all political prisoners kept in other jails.

Salman was arrested on December 28, 2014, on charges of seeking regime change and collaborating with foreign powers. Al-Wefaq has rejected the charges as malicious and outright lies.

The arrest triggered massive condemnations both inside and outside the monarchy, with leaders, governments and international organizations across the world calling for his immediate release.

The Manama regime has been severely criticized by human rights groups for its harsh crackdown on anti-government protesters, which has claimed the lives of scores of people since early 2011.

Bahraini courts have given more than 200 activists long-term prison sentences on charges of alleged involvement in terrorist activities and acting against the national security. At least 70 activists have received life imprisonment since a popular uprising began in the Persian Gulf island nation in mid-February 2011.