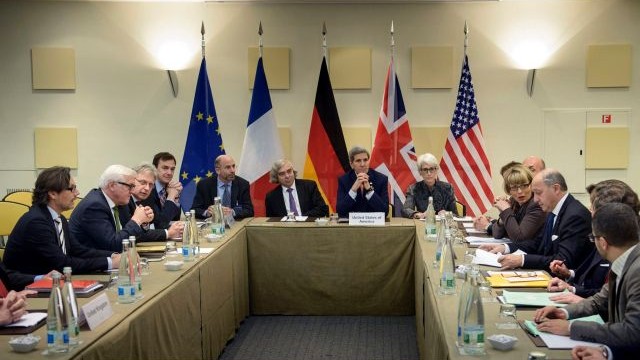 LAUSANNE, Switzerland — Negotiations over Iran’s nuclear program are focused on the pace at which sanctions and restrictions will be eased, diplomats said Sunday as Israel’s prime minister predicted that the emerging agreement would help Tehran “conquer” the Middle East.

With a deadline of Tuesday night closing in, Secretary of State John F. Kerry held a string of back-to-back meetings with Iranian negotiators and with the foreign ministers of France, Germany, China, Russia and the European Union, who all joined the talks over the weekend. The British foreign secretary was expected to arrive later Sunday, creating a joint front in the final push to settle unresolved issues.

Several of the diplomats, including Kerry, are rearranging their schedules so that they can remain at the talks for several more days.

The negotiations are growing more intensive, starting early in the morning and continuing until almost midnight. A U.S. official familiar with the negotiations said it would not be surprising if the talks come down to the wire, continuing through deadline day.

The talks revolve around restrictions Iran would accept on its nuclear program in exchange for the easing of international sanctions, which Iran desperately desires. Negotiations started more than a decade ago, but they picked up momentum 11/2 years ago after Hassan Rouhani was elected president of Iran on a promise to get sanctions relief.

Although nothing is considered settled until the entire agreement’s parameters are outlined, Iran tentatively has agreed that an accord would last 15 years and sanctions would be eased gradually. That represents a concession by Tehran, which initially wanted a shorter duration and immediate sanctions relief.

But differences remain over the details within those areas, said a U.S. official speaking on the condition of anonymity because of the sensitive nature of discussions.

One sticking point is about timing: when Iran can expect to see at least some international sanctions lifted, particularly those imposed by the United Nations.

“We all have agreed, including Iran, that there needs be a phased, step-by-step, reciprocal approach in any understanding that is reached. How we judge that, obviously, may be a little different on different parameters of the agreement, and that’s what a negotiation is all about,” the official said.

Another persistent disagreement, the official said, involves how much nuclear research and development Iran would be permitted to conduct over the final five years of a 15-year pact. Iran wants to modernize about 6,000 centrifuges it would be allowed to keep operating for civilian purposes.

“A lot of other pieces of the puzzle that sit on table are not yet resolved,” the official said. “But they are the kind of puzzle pieces that most of us think will fall into place more likely than not if we get through some of these really tough, tough issues.”

As the negotiators pressed on, Israeli Prime Minister Benjamin Netanyahu expressed alarm over what he characterized as a budding “Iran-Lausanne-Yemen axis.”

“This agreement, as it appears, confirms all of our concerns and even more so,” he said at his weekly cabinet meeting.

Later, Netanyahu continued his criticism of a possible deal during a meeting with a delegation of U.S. senators led by Majority Leader Mitch McConnell (R-Ky.).

“As Israel and the Arab countries see Iran progressing with its aggression to conquer Yemen and the Bab el-Mandeb straits, talks continue as usual and go on, on a deal that from everything that we hear, paves Iran’s way to the bomb,” he said, according to a transcript released by his office.

“Will the fact that Iran will have now, while it’s still having sanctions, doesn’t yet have an easy path to the bomb, it is conquering the Middle East in ways that are unprecedented?” he continued. “Will this make their move forward more moderate or will it make it more extreme? I think it’s a no-brainer.”

McConnell said the visitors he was leading “share your concerns about this potential agreement.” He vowed to bring to a vote a bill requiring congressional approval of any deal. And if the talks collapse without a deal, he said that “ratcheting up sanctions might be the best direction to take.”