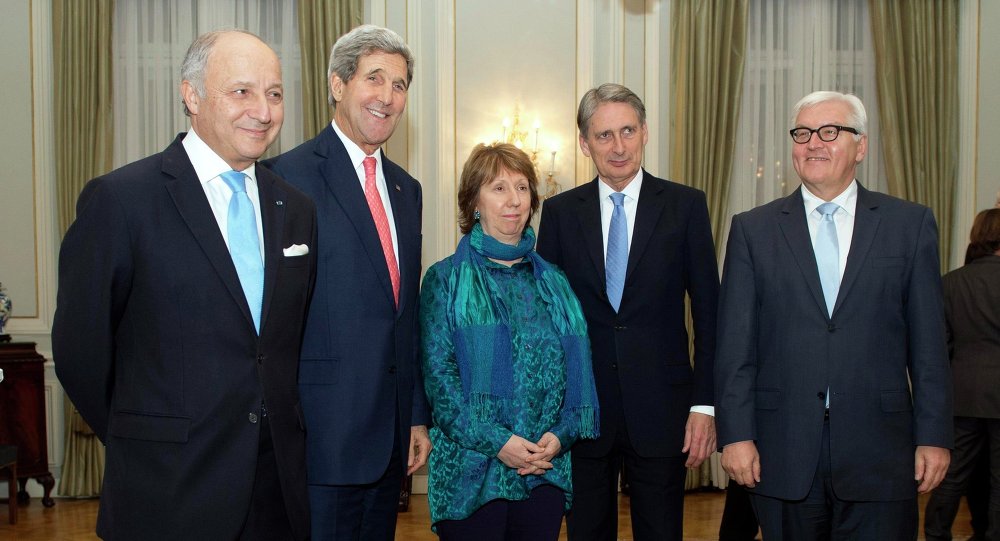 Centrifuges and enrichment: Get up to speed on Iran nuclear talks

Washington (CNN)American diplomats are in the final stretch of negotiations with Iran over its nuclear program.

World powers, including the United States, want to curb Iran’s nuclear program to keep it from developing a nuclear bomb, and Iran is eager to throw off the sanctions that have constricted its economy for several years — but it’s also keen to hold on to as much of its nuclear program as it can.

Negotiators must reach a deal — or leave it on the table — by the end of the day on Tuesday, the deadline to reach a framework agreement. If the parties succeed, they will have until the end of June to hammer out all the specific details to flesh out the framework and make it a complete deal.

The officials negotiating with Iran are from the so-called P5+1 (the five permanent members of the U.N. Security Council — the United States, the UK., France, China and Germany — plus Germany). Right now, they’re still haggling over certain technical details.

So what are those technical details? And how do those details relate to keeping Iran from making a bomb? Here’s a guide to the key terms and major concerns animating the talks this week.

Iran already has a lot of the building blocks necessary for a nuclear bomb — such as centrifuges, which are the machines that turn natural uranium into the key ingredient, highly enriched uranium, needed to make a bomb.

Centrifuges are tube-shaped machines that use centrifugal force to enrich uranium. Natural uranium goes in and, after what is essentially a spin cycle, more highly concentrated uranium ripe for a nuclear reaction comes out.

A major point of contention has been the number and sophistication of centrifuges Iran can continue operating as part of the deal.

Iran currently has about 18,000 centrifuges, 10,000 of which are still spinning today. Under a deal, the country would likely have to cut down the number of centrifuges it uses to about 6,000.

Iranian officials insist their nuclear program is intended for peaceful purposes, and it can be hard to tell what a facility is designed for. Enriched uranium can be used to fuel a nuclear reaction to produce either energy for electricity, or — in much larger quantities and higher concentrations — a nuclear bomb.

So you can’t just use any enriched uranium to create a bomb — it needs to be highly concentrated.

Weapons-grade uranium is enriched to over 90%, while most civilian reactors use about 3.5% enriched uranium.

Those percentages are misleading, though: Once you’ve got uranium enriched to 3.5%, you’re about halfway to weapons-grade uranium.

Until recently, Iran was holding onto a stock of 20%-enriched uranium, which is essentially “within striking distance of weapons-grade uranium,” said Robert Kelley, a former nuclear weapons inspector with the United Nations.

Last summer, as part of an earlier stage of the negotiating process, Iran effectively watered down that highly enriched uranium to 5%.

“That’s kind of a big deal because you spend a lot of money making that 20%,” Kelley said. “It’s like you’ve made gold and you’re turning it into lead.”

The Obama administration has touted its negotiations with Iran as “freezing” the country’s nuclear program, pointing out that it has capped Iran’s enrichment at 5%.

That’s the amount of time it would take Iran to enrich enough uranium for one nuclear bomb. The idea of the negotiations — from the West’s perspective — is to lengthen that time frame.

Right now Iran could break out in two to three months if it decided to take its current stockpile of uranium and rush toward enriching it to weapons-grade levels.

The U.S. is aiming to hold Iran to a one-year breakout time. And to achieve that, negotiators and nuclear experts have been looking at more than just the much-talked-about number of centrifuges.

“If someone sits down and says to you there’s so many centrifuges of such-and-such capacity, you can do the arithmetic and say in X months they’ll produce this much [nuclear] material,” Kelley explained.

But the calculations also depend on how effectively those centrifuges can produce enriched uranium.

To get to a one-year breakout time, Iran would have to take thousands of its centrifuges offline (some argue they should be dismantled completely). And it would also have to switch up how the centrifuges are configured to make them less efficient at enriching uranium.

Those include changing the spinning speed of the centrifuges or organizing them in a less efficient cascade, which is the process by which uranium becomes progressively more enriched through different centrifuges.

And it’s those factors that can complicate the basic calculations to estimate breakout time.

While there’s a broad-based international consensus of Iran’s estimated breakout time, some, including Israeli nuclear experts and officials, take a more conservative approach in their calculations.

Iran isn’t that far from the Jewish state and has repeatedly threatened to wipe Israel off the map, so Israelis see the threat of a nuclear-armed Iran as an existential issue in a way that the United States doesn’t. That’s part of why when they assess estimates, they assume the shortest possibility in the time range.

They also think that every action by Iran that’s reversible can and will be reversed more quickly than others tend to think.

“Everything they do to scale down — let’s say the rate of enrichment — it’s reversible,” Ephraim Asculai, a 40-year veteran of the Israel Atomic Energy Commission, said of Iran. “Within a very, very short time.”

Asculai stressed that unless the number of centrifuges was drastically reduced, Iran would be no more than six months away from a nuclear bomb.

Extending the breakout time gives the international community a greater window to react to violations if Iran breaks the terms of the deal and tries to go for a bomb. Israel wants as large a window as possible.

How inspections will be handled is another major obstacle to a deal. The consensus among nuclear experts and officials from various countries is that Iran would need to be subjected to a rigorous inspections regime to ensure that it honors a deal and doesn’t try to break out secretly.

Inspections are carried out by the International Atomic Energy Agency, an arm of the United Nations tasked with monitoring nuclear activity around the world. But IAEA inspectors aren’t the only ones keeping tabs on Iran’s nuclear program; Western intelligence agencies continue to work covertly to obtain more information on the program.

So if Iranian scientists suddenly started to enrich uranium at higher levels at those sites, or tried to recalibrate the centrifuges to enrich faster, IAEA inspectors would notice it and quickly sound the alarm.

“Once the monitors see something suspicious, they’re going to blow the whistle,” said Mark Fitzpatrick, the director of the International Institute for Strategic Studies’ nuclear nonproliferation program, who called the inspections Iran is currently subjected to “fairly rigorous.”

But Fitzpatrick added that North Korea — which broke out as a nuclear power after kicking out IAEA inspectors — could serve as a lesson that inspections must be rigorous under any deal with Iran.

It’s not exactly clear what inspections would look like in the event of a deal, but it’s likely Iran would face even more intensive monitoring.

The half dozen nuclear experts interviewed by CNN said Iran would need to face more intrusive inspections that would allow inspectors to visit more sites and see more documents related to Iran’s nuclear program, including its past nuclear weaponization research.

They also called for a deal that would give inspectors free rein to investigate nuclear activity anywhere in the country, not just at sites Iran has declared host nuclear activity.

“We need to have the ability to basically go anywhere, anytime, to snoop around,” said Michael Eisenstadt, an expert on Iran’s nuclear program at the Washington Institute for Near East Policy. “You need to have the freedom to move, and it’s not clear that the Iranians will agree to that.”

IAEA inspectors have access to all of Iran’s declared nuclear facilities, but there’s a big fear that Iran could also be advancing its nuclear ambitions at secret sites, unknown to the world.

And that’s what’s prompting calls for extremely intrusive inspections that would allow IAEA monitors to travel throughout Iran and gain access to any facility. By being close to a suspected facility, IAEA inspectors could detect nuclear activity through environmental sampling and testing.

It wouldn’t be the first time covert Iranian nuclear activity was detected: Several of the sites known to the IAEA today were previously undisclosed, hidden facilities — and it took intelligence agencies years to uncover their locations.

Pakistan quietly emerged as a nuclear power using secret sites without the IAEA having a clue. And while the world knew South Africa was developing nuclear weapons, the international community didn’t know how close they were until they already had several bombs’ worth.

Without wide-ranging access, inspectors can’t know what they can’t see and the discussion over breakout time is all but moot.

But an intrusive inspections regime that would give IAEA monitors access to almost any facility is a tough sell for Iran, which already asserts that it is being treated differently from other countries that have faced inspections.

It would subject Iran to an inspection regime unlike that of any other — a special status the West argues Tehran has earned by repeatedly attempting to cheat already existing accords and hiding nuclear facilities.

IAEA monitors would be able to detect any changes at Iran’s nuclear facilities within days or weeks at most but then the verification process begins.

IAEA inspectors would need to run the new information by the top ranks of the IAEA, who would then notify the international community. American and other intelligence agencies would then likely want to verify that information themselves before considering any action.

Maj. Gen. Yaakov Amidror, Israeli Prime Minister Benjamin Netanyahu’s former national security adviser, assessed that it would take months for Washington to feel confident enough about Iranian violations to act to halt Iran’s progress — by which time, he fears, it would be too late to stop them without a sufficient breakout margin.

Either way, it probably wouldn’t be a quick process. Reestablishing international sanctions that would get peeled away under an agreement could also take longer than the time needed for Iran to get a bomb, Amidror warned.

Extending the breakout time gives the U.S. and allies time to exhaust these diplomatic and sanctions-related efforts to stop Iran from speeding toward a nuclear weapon before moving to their last resort: a military option.

“What you want to do is … make sure there’s plenty of time to react to Iranian cheating and enough time to mount an international and domestic effort to prevent them from succeeding,” said David Albright, a nuclear expert and president of the Institute for Science and International Security. “It takes you longer than you may think for the President to take major action.”

Eisenstadt of the Washington Institute agreed: “We just know how difficult it is to get people to agree to difficult decisions and how long it takes politically to mobilize the U.S. government first and then our allies.”