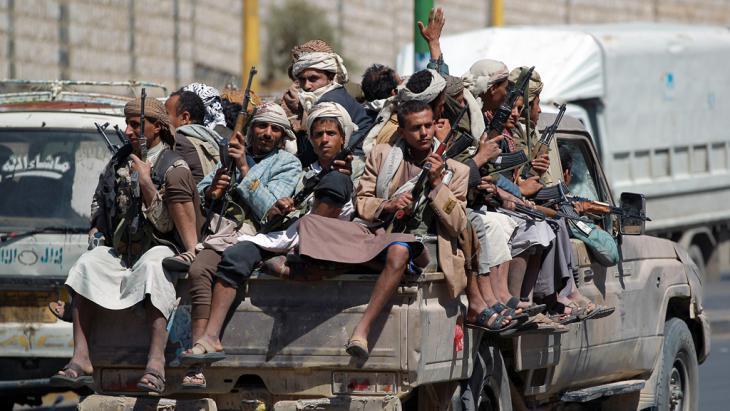 SANAA, Yemen (AP) — Saudi Arabia on Saturday blamed a “technical fault” for forcing two of its pilots in an F-15 to eject over waters south of Yemen during a mission amid a bombing campaign targeting Shiite rebels in the country.

The official Saudi Press Agency reported that the pilots were in “good health” after ejecting Thursday. It said the U.S. offered aid to rescue the airmen.

A U.S. Defense Department official told The Associated Press that an American helicopter flew Thursday from neighboring Djibouti to the Gulf of Aden and rescued the airmen. The official says the destroyer USS Sterett coordinated assets from the U.S. naval base in Djibouti and the amphibious transport dock USS New York.

The U.S. official spoke on condition of anonymity as he wasn’t authorized to brief journalists by name.

Saudi Arabia and fellow Sunni-led allies in the Gulf and the Middle East are bombing the Shiite rebels, known as Houthis. They view the Houthi takeover of Yemen as an attempt by Iran to establish a proxy on the kingdom’s southern border. Iran and the Houthis deny that Tehran arms the rebel movement, though it says it provides diplomatic and humanitarian support.

Washington says the U.S. is providing refueling tankers and surveillance flights for the Saudi operations, and there are several U.S. troops working in the operations center, but the U.S is not taking direct military action in the Gulf campaign.

At least 24 civilians were killed in Friday’s strikes, bringing the toll from two days to 45 civilians, the Houthi-run Interior Ministry said. The Houthis’ TV station showed footage from a market in Saada it said was struck by missiles, with images of charred bodies and wrecked vehicles.

Yemeni security officials said around 80 fighters from Houthi or Saleh forces have been killed in the strikes. The officials spoke on condition of anonymity because they were not authorized to talk to the press. By Friday afternoon, more than 40 percent of Yemen’s air defenses were destroyed, according to Yemeni Brig. Gen. Saleh al-Subaihi, who supports embattled Yemen President Abed Rabbo Mansour Hadi, who was forced to flee the country.

The figures of civilian and combatant casualties could not be independently confirmed.

Also Friday, Saudi and Egyptian warships deployed to Bab al-Mandab, the strategic strait off Yemen at the entrance of the Red Sea, Egyptian military officials said. The strait gives the only access to Egypt’s Suez Canal from the Arabian Sea and is a vital passage for shipping between Europe and Asia.