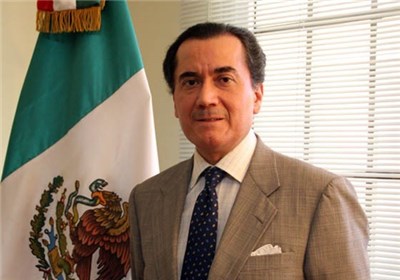 TEHRAN (Tasnim) – Mexico’s ambassador to Tehran called for concerted efforts by the international community in the fight against narcotics, stressing that Iran should not be left alone in its anti-drug efforts.

Speaking to the Tasnim News Agency, Olisus Kanjula Gutiress lauded Iran as a country at the frontline of the fight against illicit drugs, and urged the international community not to shirk responsibility but to help Iran in this fight.

He also emphasized the necessity for the adoption of common strategies, joint plans, exchange of experience and mutual cooperation in the battle against narcotics.

The envoy urged that Tehran and Mexico City exchange their experiences in the fight against narcotics given that Iran is a neighbor of one of the world’s biggest producers of illicit drugs, namely Afghanistan, while Mexico shares border with the world’s biggest consumer of narcotics, the US.

Iran is on a major transit route for drugs being smuggled from Afghanistan to Europe, the Middle East and Africa, and the country’s war on drug-traffickers has claimed the lives of nearly 4,000 Iranian security forces over the past 34 years.