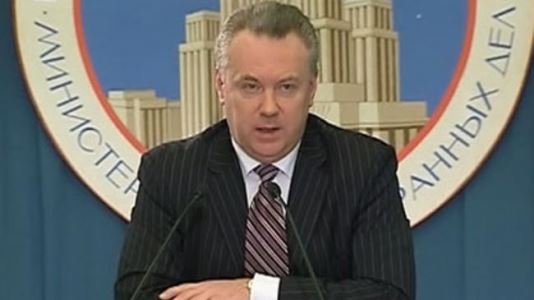 Tehran, March 26, IRNA – Russia has censured the Saudi military aggression against Yemen, saying the offensive is not the right way to settle the crisis in the Arab country.

“Such a scenario cannot lead to the conflict’s settlement by definition. By the way, a peaceful settlement of disputes is a UN Charter requirement,” said Russian Foreign Ministry Spokesman Alexander Lukashevich on Thursday as cited in an Interfax report.

The Russian official warned the United States and other countries backing the operation against Yemen of its serious consequences for regional security.

“This is a very serious threat to regional security while the conflict in Syria hasn’t been settled and conflict areas exist actually throughout the entire region of the Middle East and North Africa,” Lukashevich said at a news briefing in Moscow, reacting to the support announced by Washington for the military aggression against Yemen.

“The armed methods of resolving internal Yemeni problems are categorically unacceptable. We will be working with the Yemeni parties and the countries involved in this operation, including on the UN forum, in order to stop this rampancy as soon as possible,” he added.

The Russian official also called on all parties to the Yemeni conflict and their foreign allies to halt any sort of military engagement immediately.

“We deem it extremely important that all parties to the Yemen conflict and their external allies immediately stop any forms of military action and abandon attempts to attain their ends through weapons,” said the Russian Foreign Ministry in a commentary posted on its official website on Thursday, adding, “We are convinced that the underlying conflicts existing in Yemen can be settled only based on a broad nationwide dialogue.”

“The latest events in Yemen have dramatically worsened the already fragile situation in the country and risk having serious regional consequences,” Mogherini said in a statement.

Saudi Arabia’s warplanes invaded the Sana’a International Airport and a military air base nearby on Thursday. Reports say over a dozen civilians were killed in the airstrikes.

Meanwhile, the Russian Embassy in Sana’a announced that there were no immediate plans to evacuate Russian citizens from Yemen due to the deteriorating situation of the impoverished Arab country.

“As there have been very few requests from Russian citizens – they are singular – we are not planning any evacuation measures or actions either in relation to the embassy employees or Russian citizens living in Yemen,” said Russian Embassy spokesman, Timofei Bokov.

Moreover, a Russian expert in Oriental studies who has just returned from Yemen said the military aggression against Yemen will trigger “a large-scale conflict in the region” likely leading to a Saudi defeat.

“In my opinion, the military campaign will be absolutely unsuccessful for the Saudis. I have no faith in the ability of the Saudis to achieve something in Yemen. The Army of Saudi Arabia is really nothing: there is emptiness behind [its] beautiful [military] gear,” said Leonid Isayeve of the Higher School of Economic pedagogue.

“This army is inferior to the Yemenis by its combat readiness. The Saudi army has never fought anyone in its history. They simply cannot do that,’ he added, as quoted in an Interfax report on Thursday.

“If they decide that Yemen should strike back on Saudi Arabia, Ansarullah will not be the only movement to fight, the entire population of Yemen will get involved, and that is serious,” the Russian expert underlined, noting “I think that unless the Saudis come to their senses, their actions may lead to a large-scale conflict and I am positive that victory will not be won by the countries that get involved in the war against Yemen.”

Saudi Ambassador to Washington Adel al-Jubair said on Wednesday that his country had started to deliver airstrikes against the Houthis in the Yemeni capital city of Sana’a.

The blatant invasion of Yemen’s sovereignty by Saudi government comes against a backdrop of total silence on the part of international bodies, especially the United Nations. The world body has so far failed to show any reaction whatsoever to violation of the sovereignty of one of its members by Riyadh.