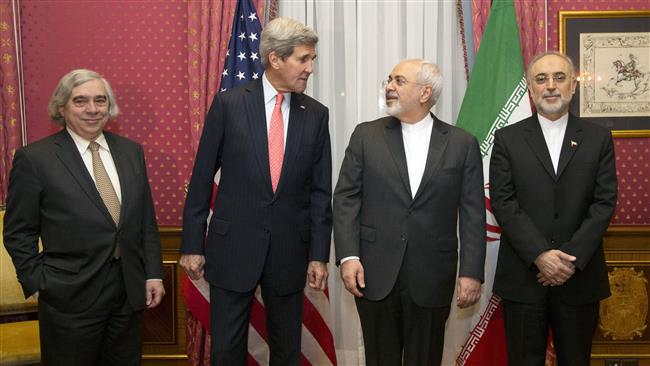 Iran’s Foreign Minister Mohammad Javad Zarif has reaffirmed the Islamic Republic’s determination to reach a nuclear agreement with the P5+1 countries, calling on the opposite parties to show political will.

“I feel that we can definitely find solutions but reaching a solution requires political will from the opposite side,” Zarif said on Friday.

“Therefore we have no doubts on the existence of political will from our side, we have to see the same political will, the same seriousness and the same convergence of opinion from all negotiators from the other side to become certain that reaching an agreement is possible,” the top Iranian nuclear negotiator said.

He noted that Iran never heeds and trusts attempts by the other side to make a fuss and sway the atmosphere prevailing over the negotiations.

Since the beginning of the talks, Iran has always stressed that the negotiations are “very difficult and complicated and include serious ups and downs” Zarif said, adding, “Sometimes there are differences of opinion in the other side which lead to contradictory and different viewpoints. So, we need to continue talks with seriousness, with diligence and patience to see whether a deal is possible or not.”

The minister noted that Iran has always said a comprehensive agreement is completely possible, pointing out, “The question of when drafting will begin is one thing and the question of finding common concepts and solutions is another.”

The Iranian foreign minister and US Secretary of State John Kerry kicked off a fresh round of talks in the Swiss city of Lausanne on Thursday as part of broader negotiations between Iran and the P5+1 countries aimed at clinching a final deal over Tehran’s nuclear program.

Talks between Zarif and Kerry on Thursday come hot on the heels of deputy-level negotiations a day earlier which brought together Iranian deputy foreign ministers Abbas Araqchi and Majid Takht-e Ravanchi, US Under Secretary of State for Political Affairs Wendy Sherman and EU deputy foreign policy chief, Helga Schmid, in Lausanne.

US Energy Secretary Ernest Moniz and head of the Atomic Energy Organization of Iran Ali Akbar Salehi are also present in the talks.

Iran and the six global powers – the US, Britain, France, Russia and China plus Germany — have been in talks to resolve outstanding issues surrounding Tehran’s nuclear activities to pave the way for striking an overarching deal on the country’s nuclear program as a deadline slated for July 1 draws closer.