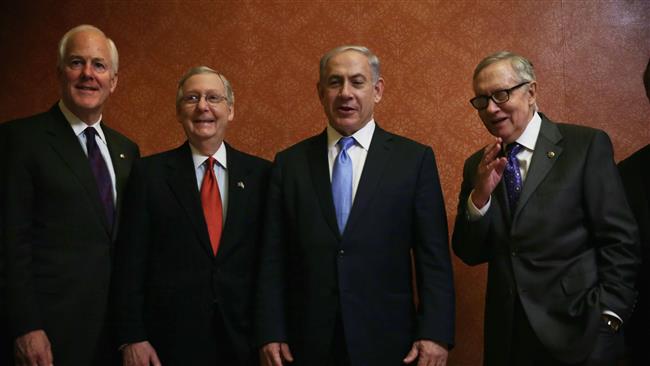 An American political commentator and antiwar activist says Republican lawmakers in the US Senate are not afraid of war but they are scared that peace might break out between Iran and the United States, challenging those groups that have a vested interest in escalating tensions against the Islamic Republic.

Brian Becker, national coordinator of the ANSWER Coalition, a protest umbrella group consisting of many antiwar and civil rights organizations, made the remarks in a phone interview with Press TV on Thursday.

He was commenting on US Senate Majority Leader Mitch McConnell’s statement that more economic sanctions would be imposed on Iran if there is no agreement over the country’s nuclear program by the end of this month.

“The Republicans in the US Senate, 47 of whom sent a letter to the Islamic Republic of Iran, advising them in essence not to sign any agreement with President Obama or his negotiators on the nuclear talk, because the US government would in most probability fail to adhere to, or live up to that obligation following the term of President Obama,” Becker said.

“The same senators are now telling Iran that should Iran fail to sign an agreement, no matter what are the terms by the end of March, they will impose new economic sanctions, knowing with certainty that additional economic sanctions on Iran at this stage would be designed to collapse any possibility of an agreement,” he added.

Forty-seven Republican senators sent a letter to Iran on March 9, warning that whatever agreement reached with Obama would be a “mere executive agreement” that could be revoked “with the stroke of a pen and future Congresses could modify the terms of the agreement at any time.”

The letter appears at a time when officials from Iran and the P5+1 –  the US, Britain, France, China, Russia and Germany – are engaged in intense negotiations to work out a comprehensive agreement aimed at ending the longstanding dispute over the Islamic Republic’s civilian nuclear work.

A group of Republican senators is pushing a new round of economic sanctions on Iran and could be part of the Senate’s agenda in coming days.

A White House petition demanding treason charges against the 47 senators has garnered more than 318,000 signatures, well above the threshold of 100,000, which requires the White House to respond.

Becker said  that “we are in a ‘damned if we do, damned if we don’t’ situation, meaning that the real object, the real goal of the maneuvers carried out by the Republicans in  the Senate, have nothing do with peace, and have nothing to do with a negotiated settlement [of the issue].”

He stated that their objective is to sabotage “any prospects of reconciliation between the United States and Iran, and any settlement of the so-called nuclear question.”

“And the reason for that is that these senators do not fear war with Iran, they fear the outbreak of peace with Iran,” the activist said, “because if the United States and Iran were to establish a new relationship, based on a recognition that increased hostility or war is against the interests of both countries…that would pose a threat, one to the status of Israel, as a needed extension of American military power in this geo-strategically important resource-rich part of the world, and secondly it would be a blow to the military-industrial complex in America which makes a trillion dollar each and every year because of war or the threat of war.”

“So these senators representing both the military-industrial complex and adopting the same position as [Benjamin] Netanyahu and Israeli government are doing everything, everything in their power to sabotage any possibility of an agreement,” Becker emphasized.

On Wednesday, a day before leaving for Switzerland to participate in the P5+1 talks with Iran, Secretary of State John Kerry defended the US policy of continuing nuclear negotiations with Iran, saying if Washington walks away from the talks, the sanctions against the Islamic Republic will not hold.

“Anybody standing up in opposition to this [Iran talks] has an obligation to stand up and put a viable realistic alternative on the table. And I have yet to see anybody do that.”

He warned critics that a failure of the nuclear talks with Tehran would lead to the collapse of the current “sanctions regime” against the country.