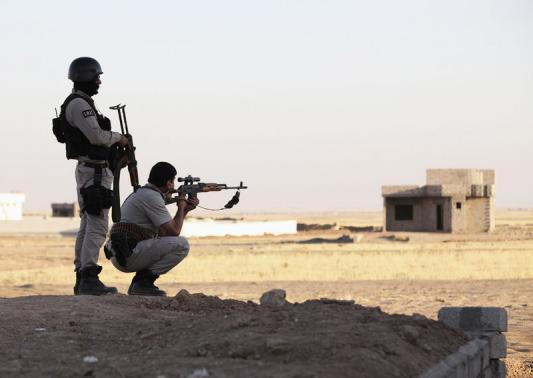 Why arming U.S. allies can be like sending weapons straight to the enemy

The United States has a long tradition of arming its allies to advance Washington’s foreign policy. In 1940, President Franklin D. Roosevelt called the United States the “arsenal of democracy” as he pledged thousands of ships, tanks and warplanes to countries battling Nazi Germany.

Roosevelt’s characterization is no less true today. The U.S. government is sending large amounts of weapons to allies desperately battling Islamic State extremists in Iraq and Syria. Washington is also considering equipping the battered Ukrainian military, which has been fighting Russian-sponsored rebels in the country’s east.

Broadly speaking, there are two ways the United States can arm an ally. America can donate, or sell cheap, the latest U.S.-made weaponry. Or it can send foreign-made weaponry — Russian usually — through a middleman.

Policymakers settle on one method or a mix of both after weighing the benefits and risks to U.S. interests and the recipient’s own preference. Both approaches have advantages and disadvantages. Both are being used now in the Middle East.

First, sending U.S.-made weapons helps American manufacturers’  bottom lines. “Made in the USA” equipment also tends to be popular among U.S. allies because in many cases it is deadlier than Russian-produced hardware. But it is usually more complex and thus harder to use. And any time Washington gives its allies U.S.-made military hardware, there’s a chance the enemy could get its hands on the stuff. This is not only politically embarrassing; it potentially betrays the Pentagon’s technological secrets.

Alternatively, though Russian-made equipment is less prestigious, it is usually easier to operate, especially for armies that used Moscow’s weapons during the Cold War. Much of the available Russian weaponry, however, belongs to unreliable — sometimes quite shady — third parties. Working with these middlemen can prove politically costly for Washington. In addition, a lot of the old Russian gear is in poor condition.

Iraq’s military was largely equipped with Russian weapons when the U.S.-led coalition invaded in 2003. As the Americans began rebuilding the defeated Iraqi armed forces, Washington donated — or pushed Baghdad to purchase — billions of dollars’ worth of U.S.-made gear, including M-16 rifles, Humvees, M-1 tanks and F-16 jet fighters.

The idea was to make the Iraqi armed forces compatible with U.S. armed forces so that, in concept, the two militaries could fight side by side from the same facilities. Even sharing the same ammunition, spare parts and fuel.

Of course, the U.S. companies that manufacture the weapons also benefit.

When Baghdad proposed to acquire 36 F-16s, starting in 2011, the Pentagon’s Defense Security Cooperation Agency, which facilitates arms sales, justified the proposal to Congress by claiming that the jets would “greatly enhance Iraq’s interoperability with the United States and other North Atlantic Treaty Organization nations, making it a more valuable partner in an important area of the world.”

The Pentagon did not mention the risks inherent in handing over top-of-the-line U.S. hardware. But that danger soon became apparent. When Islamic State militants swept into northwest Iraq in the summer of 2014, they quickly routed the lavishly equipped but poorly led Iraqi army — and captured much of the high-tech U.S.-made weaponry the fleeing Iraqi soldiers left behind.

The equipment the Iraqi army abandoned in mid-2014 included at least one M-1 tank, hundreds of which the United States has sold to Iraq in recent years. The $4-million M-1 is viewed as the best tank in the world because of its tough armor, powerful main gun and high-tech sensors. It is one of the U.S. Army’s main advantages over rival armies.

It was bad enough that Islamic State snagged one or more M-1s among other U.S. weapons. U.S. officials expressed further alarm when, in late January, someone posted a video to YouTube depicting the Hezbollah Brigades, an Iraqi Shi’ite militia heavily backed by Iran, rolling into battle against Islamic State in a convoy that included at least one M-1.

It’s unclear how the Hezbollah Brigades, which Washington has labelled a terrorist group, acquired the M-1. But according to the Long War Journal, which first drew wide attention to the YouTube clip, it’s possible the Shi’ite fighters recaptured the tank from Islamic State.

If that’s true, then that key U.S. weapon is now in the arsenal of not one but two armed groups that Washington opposes, one of which enjoys strong ties to the regime in Tehran, with which the United States is also at odds.

The Pentagon has not proposed to cut off supplies of U.S.-made weaponry to Iraq, despite the tendency of these weapons to wind up in the arsenals of U.S. enemies. The Pentagon has spent $20 billion since 2003 training and equipping Iraqi forces to be more like U.S. forces — and isn’t about to declare that investment a total loss and start over.

But Washington is taking a different approach with its other ally in Iraq.

For decades, the United States backed the Kurds of northern Iraq in their wars of independence against Baghdad. In 1992, with U.S. warplanes flying top cover, the Kurds succeeded in establishing a mostly autonomous region inside Iraq.

But since the U.S.-led invasion of Iraq proper in 2003, the politics have changed. Now Washington has a major stake in preserving Iraq’s unity rather than shattering it. Until very recently, U.S. policy barred the Pentagon from directly arming the Kurds.

With its decades of experience and sound leadership, the Iraqi Kurdish army — the peshmerga — has been one of the most effective fighting forces in the campaign against Islamic State. The peshmerga have protected Kurdistan’s major cities. After briefly losing ground to Islamic State last summer, they are now steadily pushing back the militants.

But the peshmerga are a lightly armed militia equipped mostly with Cold War-vintage Russian weapons that they stole from the old Iraqi army or acquired on the black market. While brave and well-led, the Kurds have found themselves outgunned in battles with Islamic State.

The experience of peshmerga fighter Maarof Kabays is, sadly, typical. In August near the village of Zummar, militants attacked Kabays’ unit with tanks. “We did not have any heavy weapons to defend ourselves,” Kabays said. He and seven other fighters retreated. But only Kabays and one other man from the group survived.

In any event, the United States had to acquire the Russian weaponry before it could donate it to the Kurds. When direct provision of expensive U.S.-made weaponry is prohibited or impractical, sending Russian arms through a third party is Washington’s other way of arming an ally.

That approach has the benefit of precluding U.S. weaponry from ever falling into enemy hands. But the third-party strategy has its own drawbacks. It compels Washington to forge potentially compromising partnerships. The weapons that result are sometimes of dubious quality — perhaps unsurprising considering their source.

Now, we don’t know for sure where the peshmerga’s extra weapons came from before the Air Force dropped them in Kurdish territory, starting in August. It’s possible U.S. advisers in Iraq got the arms from old Iraqi warehouses. There have been discussions between Washington and Baghdad about the United States “backfilling” any equipment that Iraq donates to the Kurds.

But it’s also possible Washington went shopping abroad. There’s plenty of precedent for that kind of thing. Robert Grenier, the CIA’s former station chief for Pakistan and Afghanistan, revealed one such initiative in his new book, 88 Days to Kandahar.

In mid-November 2001, the CIA was actively supporting pro-U.S. Afghan warlords battling the Taliban and al Qaeda in Afghanistan. Warlord Gul Agha Sherzai, who would later become one of Afghanistan’s most prominent politicians, begged for extra weaponry for his men as they prepared to attack the Taliban in Kandahar.

Grenier turned to his allies in the Pakistani government. General Jafar Amin, from Pakistan’s Inter Services Intelligence agency — the notorious ISI — arranged for a consignment of Pakistani army AK-47s and RPG-7 rockets for Gul Agha’s men in Pakistan. The U.S. Air Force dropped additional bundles of Pakistani weapons to Gul Agha’s men as they advanced across Afghanistan.

Counting on the ISI to arm U.S. allies was risky. Powerful, ideological and largely unaccountable to elected leaders, the ISI is arguably a destabilizing force not only in Pakistan but across Central Asia. In 2001, Grenier discovered that he could rely on the ISI to provide weapons — but not necessarily functional weapons.

“Gul Agha’s people reported that while the Pak-supplied RPG-7s were fine,” Grenier wrote, “the AK-47s were old and heavily used, and many were essentially unserviceable.”

“It’s possible that we had fallen victim to some surreptitious Pakistan army conspiracy to undermine the anti-Taliban war effort,” Grenier admitted. He added it was more likely a case of some supply officer dumping old weapons he no longer wanted in his warehouse.

Despite the shoddy equipment, Gul Agha and his troops still succeeded in taking Kandahar.

But the lesson should be clear. Equipping your ally via some third party — a necessity when the weapons in question are Russian-made — can be at least as risky as supplying U.S.-manufactured gear that the enemy might capture.

Arming an ally to fight on America’s behalf can save U.S. lives and money. But it’s not a foolproof strategy.

With U.S.-made weapons, the main danger lies in controlling where the hardware winds up. With Russian-made gear, the greater risk is in where the weapons came from.

This article was written by David Axe for Reuters on March 25, 2015. David Axe is the national security editor at Medium.com. He has written for Danger Room, Wired and Popular Science. His most recent graphic novel is “Army of God: Joseph Kony’s War in Central Africa.”