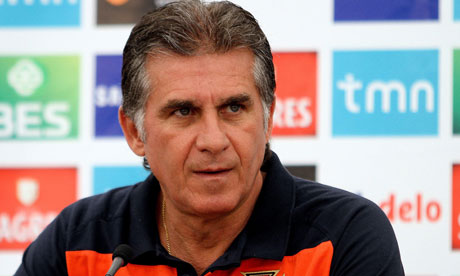 Authorities stopped Iran coach Carlos Queiroz from leaving the country Saturday over accusations of an unpaid tax bill, an Iranian football federation official said. The travel ban was lifted later in the day after talks with tax officials.

The former Real Madrid head coach was stopped at the Tehran airport as he and the Iranian team were leaving for Europe for friendlies against Chile and Sweden. The team had to travel without him.

The incident came one day after Queiroz resigned from his post, citing “external pressures” despite signing a contract extension through 2018 six months ago. Queiroz’s job is due to finish at the end of this month.

It said federation chief Ali Kafashian cut short a visit to Iran’s tourist island of Kish on Saturday to solve the issue, concerning $312,000 in taxes.

Ali Reza Asadi, a federation official, the problem was resolved late Saturday following talks with taxation officials and that Queiroz will join the team soon.

The travel ban may have been rooted in politics: Iran’s sports minister reportedly wants Queiroz out, while the football federation continues to support him.

Iran was among the favorites at the Asian Cup in January but its disappointing quarterfinal exit after losing on penalties to Iraq brought about increasing criticism of Queiroz.

The Portuguese manager and former goalkeeper took over Iran in 2011 and successfully guided the team to the 2014 World Cup in Brazil. However, Queiroz’s side finished bottom of Group F, which saw group winners Argentina advance to the final and Nigeria finishing runners-up.
By Al Arabiya