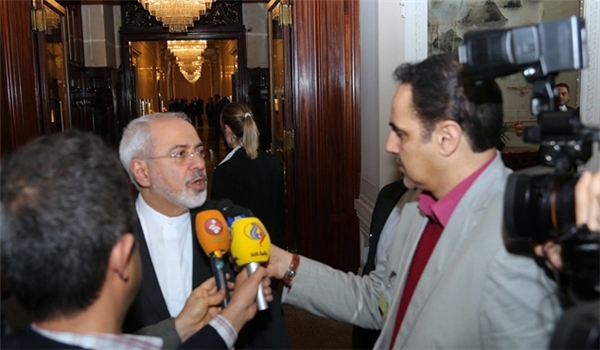 “The discussions have reached the details. We are working on the solutions and have reached highly sensitive points,” Zarif told reporters in the Swiss city of Lausanne today.

He described his talks with Kerry as “positive”, and said, “We had good talks.”

With regard to the main bones of contention, the Iranian top diplomat said one or two topics are still in place which need to go under more discussions due to their difficult nature.

“At present, (Head of the Atomic Energy Organization of Iran) Mr. (Ali Akbar) Salehi and (US Energy Secretary Ernest) Moniz are holding talks and we hope that some progress will be made.”

He said that he would meet Kerry again at 14:00 local Swiss time.

His remarks came as the eighth round of talks between the Iranian and US nuclear negotiators was held in Lausanne on Friday morning in the presence of Zarif, Kerry, their deputies, Salehi, Moniz, and EU foreign policy chief Federica Mogherini, and her deputy Helga Schmid.

Iran and the Group 5+1 (the US, Russia, China, Britain and France plus Germany) are negotiating to narrow their differences over Tehran’s nuclear energy program ahead of a July 1 deadline.

Iranian Foreign Minister Mohammad Javad Zarif and US Secretary of State John Kerry held the seventh round of their talks in Lausanne, Switzerland, on Thursday evening.

In relevant remarks on Tuesday, Head of the Atomic Energy Organization of Iran (AEOI) Ali Akbar Salehi announced that Tehran and Washington had overcome their differences on technical issues with regard to Iran’s nuclear program in most of the cases, adding that both sides were trying to resolve the remaining technical problems.

“We have agreed on 90 percent of technical issues,” Salehi said after his second meeting with US Secretary of Energy Ernest Moniz in Lausanne, Switzerland, on Tuesday.

Salehi is in Lausanne along with Zarif and his negotiating team to hold talks with the world powers on Tehran’s nuclear issue.

The Iranian top diplomat traveled to Brussels on Monday night for an 8-hour visit and meeting with his European counterparts and returned to Lausanne on Tuesday.

On Monday, Zarif and Kerry held discussions for five hours in Lausanne. The meeting was also attended by Salehi, Iranian Foreign Minister’s deputies Seyed Abbas Araqchi and Majid Takht Ravanchi and President Rouhani’s Special Aide Hossein Fereidoun as well as US Energy Secretary Ernest Moniz and US Under Secretary of State for Political Affairs Wendy Sherman.

Iranian and American teams of negotiators held several days of talks in Geneva late in February. Then Zarif, Salehi and Fereidoun as well as Kerry and Moniz joined their deputies two days after the start of the talks.

Zarif, then, traveled to Montreux in western Switzerland two weeks ago for another three days of nuclear talks with Kerry.